The new Leafs goaltender credits a sports psychologist for his turnaround. 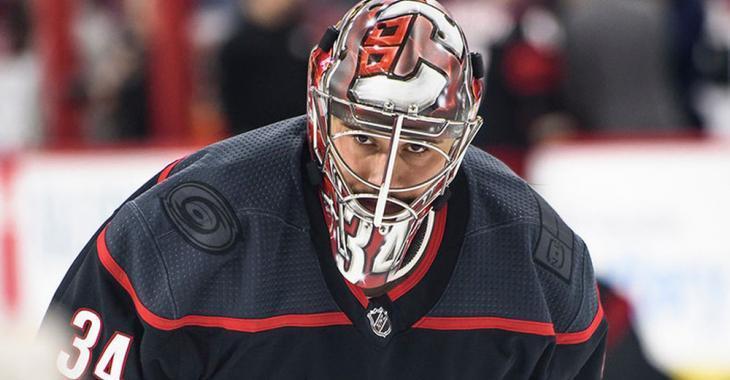 New Toronto Maple Leafs goaltender Petr Mrazek has enjoyed a successful NHL career that's spanned nearly 300 games with three different franchises, and he's the newest figure in the crease in one of the NHL's most scrutinized and media-heavy markets.

He resurrected his career as a member of the Carolina Hurricanes, helping them to their first playoff series win in a decade in 2019 and earning a position of a fan favorite. And now, he's ready for a new challenge - and he explained what was behind the turnaround following what he described as a bad ending to his time with the Red Wings.

“My career in Detroit didn’t end well, and I’m not happy about that, but I moved on,” he said, pointing to his time with the Hurricanes. “I established my career and my level of performance. A lot of things changed in that off-season before I came to Carolina; I hired my psychologist, (who I have been) working with since then, and that was the turnaround.”

The psychologist Mrazek is referring to is none other than Marian Jelínek, who also happens to be the trainer, agent and personal coach of fellow Czech Jaromir Jagr.

"He worked with Jaromir for 20 years in Detroit and Washington and New York,” Mrazek said,

“We were working to stay always on the same level, on the ice and off the ice, and try to repeat good performances every game, and show up every single day ... I came to him and said, ‘I want to have all the games great, I don’t want to be great and then bad, great and bad again.’ So we worked on that a lot.

“He was responsible for the turnaround ... Before, I was like, ‘I don’t need a psychologist.’ But at end of the day, when you look at it, a lot of it is in your head. Be strong mentally and be prepared.”

Last year with Carolina, Mrazek posted a record of a 6-2-3 record with three shutouts, a 2.06 goals against average and a .911 save percentage. In 275 career regular season games with the Detroit Red Wings, Philadelphia Flyers and Hurricanes, Mrazek sports a 128-96-31 record with a 2.59 goals against average, a .911 save percentage and 24 shutouts - but what's missing is a Stanley Cup ring, and he wants to earn one with the Leafs.

"I think Toronto and the New York Rangers are two biggest teams in the NHL," he said. "That’s one of the reasons I came to Toronto. But I want to win. I’m at the age when I would like to achieve something and win the Stanley Cup, so I believe this team is capable of doing it.”