The Sens and Sharks prospects take a stand against racial injustice. Thoughts? 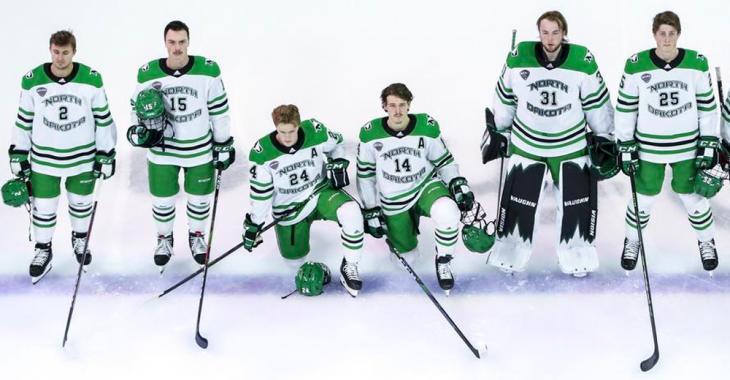 University of North Dakota assistant captains Jacob Bernard-Docker and Jasper Weatherby made the bold choice to kneel for the signing of the "Star Spangled Banner" prior to their game last night, dividing fans across the college hockey world. While some fans are praising the boys for their sentiment, others see it as an absolute slap in the face to those who have served for the United States of America.

"We believe racial injustices and the treatment of minorities and people of color in this country needs to stop, and it needs to be improved all over America and all over the world," Weatherby, a 4th round pick of the San Jose Sharks, said. "For us, being able to have a platform in a place where there aren't a lot of people of color in hockey or in Grand Forks, it's a really interesting position for us to be in. It's a great platform.

"At the end of the day, we want UND to be a safe place. As athletes who do have a platform, we stand with our brothers and sisters of color."

Bernard-Docker, a 1st round pick of the Ottawa Senators, clarified that the pair meant no disrespect to serving troops and to veterans.

"I have the utmost respect for the military and people who have served," Bernard-Docker said. "I have no disrespect to veterans. I have two grandpas who fought in world wars. They have passed away now. But I have no doubt they would support what I'm fighting for, which is the right to be treated equally."

UND coach Brad Berry says that not all of Bernard-Docker's and Weatherby's teammates were on board with the protest, but that the team values diversity of opinion.

"This is something that just didn't happen tonight. It was thought about from the players' standpoint. Jasper and JBD talked about it within the locker room. Everybody got their head around what was going on. And for the one time they did it, the one time tonight, it was something they wanted to do. Everybody, myself included, has different thoughts and different beliefs as, probably, those guys. But at the end of the day, it was a respect thing and we want to make sure nobody is disrespected through what happened today."

Tony DeAngelo breaks his silence.
Subscibe to
Our NEWSLETTER
Receive the best articles of the web directly in your email