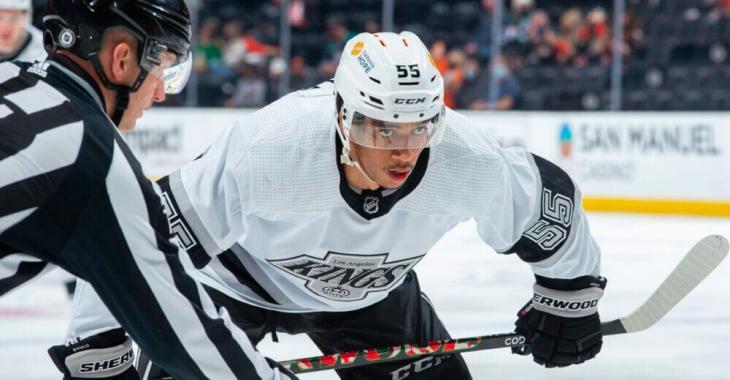 The 19 year old Byfield was selected 2nd overall by the Kings in the 2020 NHL Entry Draft last offseason, but spent the majority of the season with the team's AHL affiliate Ontario Reign. He put up a solid eight goals and 20 points in 32 games with the Reign and a single point in six games with the Kings. Heading into this season though Byfield is expected to make the Kings full-time, so today's injury news is obviously concerning.

Taking a look at the Kings' roster, there's an obvious spot for Byfield on the team's third line center position. Captain Anze Kopitar obviously has a lock on the top spot and newcomer Philip Danault will likely hold down the second line position. Of course, Byfield could also move up the lineup and play on the left side alongside either Kopitar or Danault. In fact, being a big guy with strong two-way abilities, Byfield could potentially benefit greatly from watching a guy like Kopitar up close. Suffice it to say that the Kings would be absolutely ecstatic if Byfield were to mold his game after a totla pro like Kopitar.

The fact of the matter though is that Kings are a young team with a LOT of growing to do. While their will be some expectation for young guys like Byfield, Alex Turcotte and Gabriel Villardi to take the next steps in their development, the season won't rest on their shoulders. Veterans like Kopitar, Danault, Dustin Brown and defencemen Drew Doughty and Alex Edler (signed as a free agent this offseason) will likely carry the load for the team, for better or worse, this season. And while that might sound terribly encouraging as far as the standings are concerned, I can't think of many better veterans in the NHL to impart their wisdom. Kopitar, Brown and Doughty are all obviously two time Stanley Cup champions while Danault and Edler are both respected veterans who themselves are also Stanley Cup Finalists.

Marc Andre Fleury opens up about the loss of his father, Andre Fleury.
Subscibe to
Our NEWSLETTER
Receive the best articles of the web directly in your email