3 potential options for the Leafs in goal. 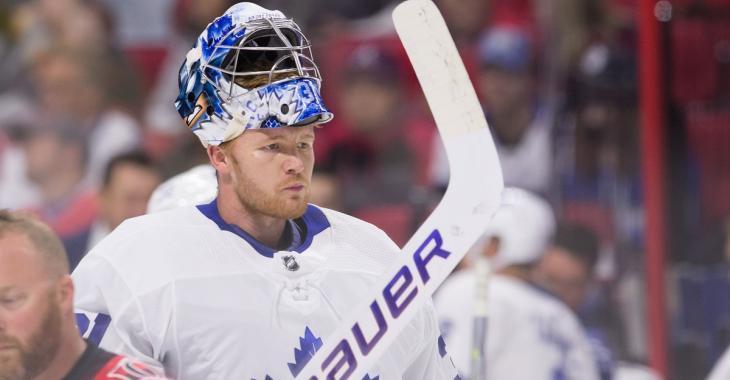 The Toronto Maple Leafs are coming off a big win over the Calgary Flames thanks in large part to a shutout performance from their goaltender, but it wasn't Frederik Andersen who was between the pipes on Saturday night but instead it was backup Jack Campbell.

Andersen has long been the subject of criticism in Toronto for his inability to perform come playoff time, but this season the criticism has risen to another level with Andersen looking shaky during the regular season. The Leafs are now poised to have their best shot at making a deep playoff run in years and there are many who are hoping the team will look to replace Andersen ahead of the National Hockey League's trade deadline. General manager Kyle Dubas has hinted that his focus will be on acquiring a forward, but assuming that the Leafs do consider the possibility of making a goalie change we're going to look at 3 potential options for the team.

There's no question that this is the best available option, but for that reason it may also be the most difficult for the Maple Leafs to make a reality. Kuemper has been outstanding for the Coyotes for several seasons now and in spite of the fact that they once again find themselves outside of a playoff spot he has put up respectable numbers with a .914 save percentage and a 2.41 goals against average over 18 games played. Kuemper's cap hit of $4.5 million is very affordable for what he brings to the table but what truly makes him a dream candidate is the fact that he would remain under contract for an additional season beyond this one, giving the Leafs a solid netminder for 2 playoff runs rather than just one.

Kuemper is currently battling an injury though, and depending on what his prognosis is like that could pump the breaks very quickly on this trade.

This one makes sense for many reasons, including the fact that Bernier is a familiar face when it comes to the Leafs organization. Like Kuemper he's not playing for a great team but he's recorded solid numbers with a .918 save percentage and a 2.78 goals against average over 17 games with the lowly Detroit Red Wings. Bernier is on an expiring contract which means he won't need to be protected in the expansion draft for the Seattle Kraken and with a cap hit of $3 million he's even more affordable than Kuemper. The Red Wings are currently dead last in the NHL's Central Division which means that they will be looking to sell off their assets at the deadline, likely making this a much cheaper option for the Leafs.

After a deep run in the Stanley Cup Playoffs last year the Stars now seemed poised to miss the playoffs entirely and there is now talk that they could look to be sellers at the trade deadline. Khudobin was marvelous for them last season, stepping in for the injured Ben Bishop, and while you might think that would make them wary of trading him away, that may not be the case. Khudobin could not only net the team a solid return at the trade deadline but they could very well end up losing him to the Seattle Kraken for nothing in the expansion draft if they protect the aforementioned Bishop as is expected to be the case.

Khudobin's 2.46 goals against average and .912 save percentage represent a drop off from last season, but with the team faltering around him it is hard to gauge how much of that should be placed at his feet. Khudobin would make for an ideal backup to Campbell if the Leafs choose to give him the starting role, and at a cap hit of $3.33 million per season he's very affordable. The Stars could even in theory retain salary to make this deal more palatable for the Leafs, and to net themselves a better return, especially considering he has 2 years remaining beyond this current season on his deal.

Of course I have to mention that all of these goaltender's would be forced to deal with the quarantine that is required when entering the country of Canada, which could prove to be a huge hurdle for the Leafs in any of these potential deals.

Atlanta Thrashers want to return for 2021 to help Canadian clubs!