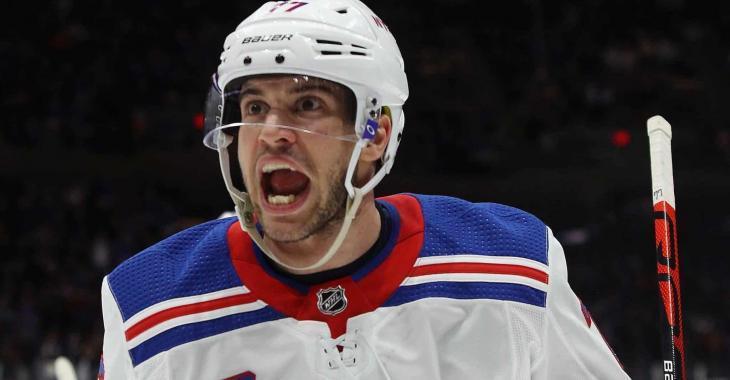 UPDATE: The New York Rangers indeed placed Tony DeAngelo on unconditional waivers at noon on Friday for the purpose of a buyout.

Back in February, then-former New York Rangers general manager Jeff Gorton has made it clear that defenseman Tony DeAngelo has played his final game with the club. At the beginning of February, DeAngelo was placed on waivers and went unclaimed. This happened after New York’s overtime loss to the Pittsburgh Penguins: DeAngelo and goaltender Alexandar Georgiev were involved in an altercation that was quickly broken up by a teammate. And this came after a long history of unapologetic history of abuse and bigotry, Donald Trump support and COVID-19 denialism…

Clearly, DeAngelo does not have the best attitude and his reputation has suffered seeing that there was chatter that a trade could take place around the deadline, however, no rival teams was quite convinced that DeAngelo could change his attitude and be a good acquisition.

However, this was month ago and today’s update could change a few things on the market. According to Frank Seravalli of Daily Face-off, the Rangers plan to officially begin buyout process of DeAngelo. DeAngelo is expected to be on unconditional waivers today to being the process.

“Two year cap charge for New York at $383k and $883k. He will become UFA once buyout is executed after passing through waivers.”

This means that DeAngelo could make a return in the NHL if a team chooses to take a gamble with him. He could be offered a cheaper deal, seeing that he is still getting a chunk of money by the Blue Shirts, and then make his way back into the good books. After all, several teams, including the Edmonton Oilers, Toronto Maple Leafs and Montreal Canadiens, amongst others, have been shopping for a hand on their back end.

It’s been a rapid descent for DeAngelo, but rival teams see the potential in him. Last season, he recorded a career-high 15 goals and 53 points in 68 games. He posted just one assist and is minus-6 in six games this year while averaging 18:29 of ice time. DeAngelo signed a two-year, $9.6 million contract in October and carries a $4.8 million cap hit.

So you see how he could accept a short, cheap deal to clean up his act in the NHL.

Zack MacEwen gets claimed off waivers!
Subscibe to
Our NEWSLETTER
Receive the best articles of the web directly in your email