No surprise that DeAngelo has been suspended twice for using slurs. The apple doesn't fall far from the tree. 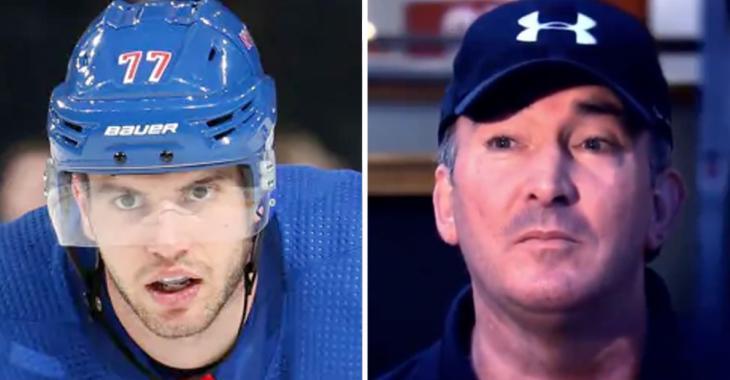 In case you missed it yesterday, the Carolina Hurricanes made some serious headlines on the opening day of NHL free agency and not particularly for the best reasons.

The Hurricanes, of course, lost top defenseman Dougie Hamilton after Hamilton signed a monster eight year contract with the New Jersey Devils that will pay him $9.5 million annually until 2029. It was a whopping deal that left the Hurricanes with a gaping hole on their defensive depth chart and forced GM Don Waddell into a difficult position. So what does Waddell do? He goes out and signs the most controversial free agent on the market.

Waddell and the Hurricanes signed former New York Rangers blueliner Tony DeAngelo to a one year, $1 million contract in a deal that was met with considerable criticism across the NHL. After all, how many chances is DeAngelo going to get? This is a guy with a checkered past and present, one that should make any employer wary of committing to him.

Here's a quick recap of DeAngelo's transgressions courtesy of Hurricanes insider Sara Civian of The Athletic:

• He was suspended in the OHL for violating the league’s harassment, abuse and diversity policy, resulting from a slur directed at a teammate.

• He has been suspended twice for abuse of an official — once in the OHL and once while playing for the Arizona Coyotes.

• He was waived by the New York Rangers after an altercation involving a teammate.

• He has a raucous social media history that includes urging a fan who disagreed with one politically charged take to find him outside Madison Square Garden after a game. “I’m an easy guy to find …” he wrote. “You don’t have to tell me what you would or wouldn’t do … just show me if you want to be a big man.”

Again, is that a man you're willing to bet on? For the Hurricanes it appears so. And you know what? DeAngelo himself seems to be saying all the right things. He wouldn't go into specifics, but DeAngelo says he's learned a lot in the past year and is eager to prove it to his new organization.

“I just have to go to Carolina when I get there, prove it to the team, the players and obviously ownership, coaches. So I’m looking forward to it,” he said in a particularly uneventful press conference.

A video of DeAngelo's father from 2014 though is casting doubt on people's thoughts that the player might turn over a new leaf. His father openly admits that he uses racial slurs "every day" and seems unwilling to apologize, saying simply that it's the "way he was raised."

The way you were raised is no excuse.

It's called growing as a person. It's realizing that using a racial slur is NEVER appropriate, whether in the heat of battle or otherwise. This guys wants to say it's a "South Philly thing", which is 100% BS. It's a bigoted, racist thing and it has no place in hockey. The apple doesn't fall far from the tree, unfortunately.

Canucks/NHL release statement on the Jake Virtanen situation.
Subscibe to
Our NEWSLETTER
Receive the best articles of the web directly in your email