A devastating hit from Tom Wilson. 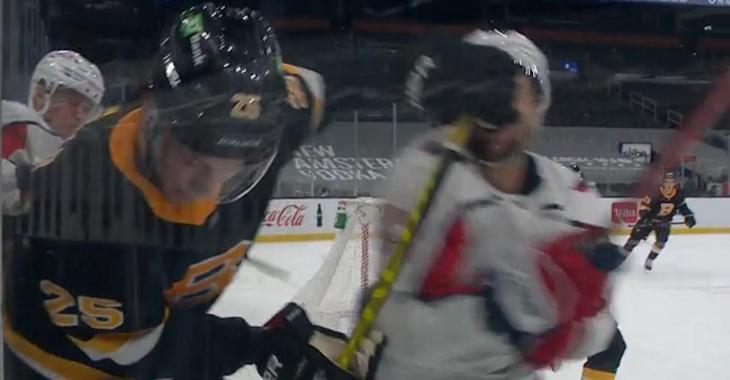 On Friday night the Boston Bruins faced off against the Washington Capitals and in the game's very first period we witnessed a very serious looking injury to Bruins defenseman Brandon Carlo.

Carlo was the victim of an ugly looking hit from Capitals forward Tom Wilson, one that saw Carlo's head crushed between the boards and the impact from Wilson's body. Wilson has of course earned a reputation as one of the most violent hitters in the entire National Hockey League, often devastating the opposition with his physical play, and perhaps due in large part to both his reputation and the ugly visuals from this hit there has been a ton of backlash following the hit.

I do have to point out however that there is no question that Wilson made contact with Carlo's body first. In real time the hit looks considerably worse, but when the play is slowed down you can clearly see that Carlo's shoulder and torso are the initial point of contact.

Unfortunately that may have made things even worse. The initial bump from Wilson pushes Carlo's body back and leaves his head completely vulnerable along the boards, which Wilson then crashes into. To be clear here I'm not suggesting that Wilson's intentions were pure, I can't read the man's mind after all, however this very important detail could have a major impact on how the National Hockey League's Department of Player Safety will handle this moving forward.

That detail will however be of no comfort to the Boston Bruins who reported, via head coach Bruce Cassidy, on Friday night that Carlo had to be taken to the hospital in an ambulance following the hit, no surprise given just how bad this one looked. Carlo immediately clutched his head and collapsed to the ice following the hit and was unable to leave the ice under his own power, eventually being helped back to the Bruins locker room.

Wilson himself did not walk away from the exchange unscathed, sporting a cut on the bridge of his nose after he was mauled by the Bruins' Chris Wagner following the hit. He also would answer for the hit after the fact as well when the recently acquired Jarred Tinordi dropped the gloves with Wilson in a pretty spirited scrap.

Blackhawks sign veteran center Carl Soderberg.
Subscibe to
Our NEWSLETTER
Receive the best articles of the web directly in your email