Bet he’s getting under their skins with his statement: 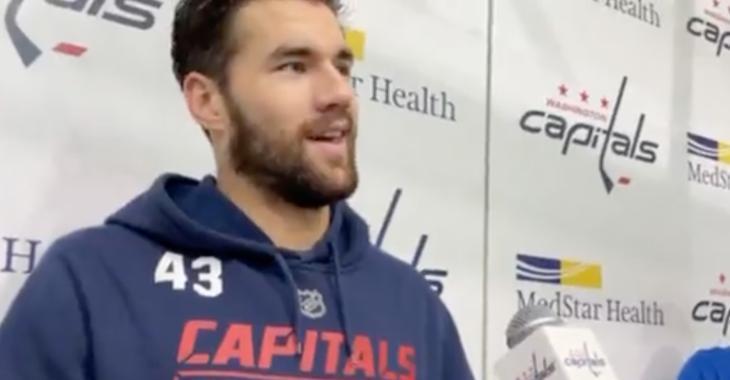 You know what happened at the end of the 2020-21 season between the Washington Capitals and New York Rangers, but if by any chance you have have forgotten, let us refresh your memory:

Back in May 2021, Wilson was fined $5000 for punching then-Rangers forward Pavel Buchnevich in the back of the head as he was facedown on the ice, while also throwing star Artemi Panarin to the ice in the ensuing scrum. When the teams faced off again days later, a line brawl featuring all six forwards erupted on the ice in the opening seconds of the game. Three more broke out in the first period alone, including Wilson taking on Rangers defenseman Brendan Smith. It was madness.

Over the summer, the Rangers kept making it known that they were looking to get bigger and stronger for the upcoming season, needing to address what they called the “Tom Wilson Problem.” This prompted the team to acquire tough guy Ryan Reaves from the Vegas Golden Knights in return for a third-round pick in 2022.

Fast forward to tonight where the Capitals and Rangers face off in their season opener. Wilson met with reporters and was asked about the possibility of having to fight one Ranger - or more - in the first contest of 2021-22, and Wilson responded by saying that he was focused on other goals this year.

Though, it’s hard to believe when he answers with his grin on his face:

I’m willing to bet that Reaves will come out guns ‘a blazin’ in New York, looking to fix that Wilson problem. Let’s see if the message is sent as soon as tonight.