NHL News : Tom Wilson reaches out to Artemi Panarin after injuring him

Unexpected update in this chaotic storyline! 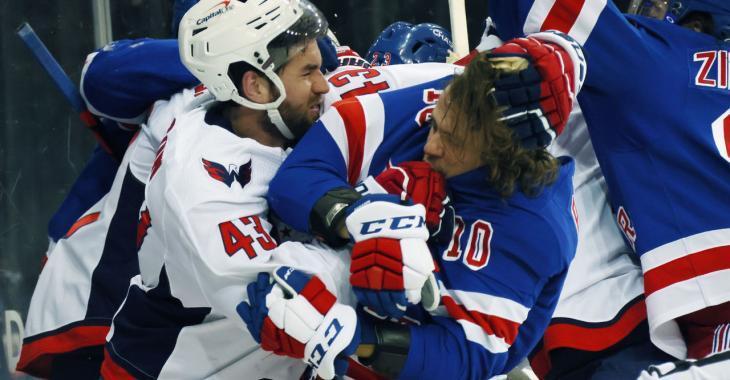 To say things got messy after Washington Capitals’ Tom Wilson was fined $5000 for punching New York Rangers forward Pavel Buchnevich in the back of the head as he was facedown on the ice, while also throwing star Artemi Panarin to the ice in the ensuing scrum, is an understatement. As you know since then, the Rangers called out the league and demanded it fired the Head of Player Safety, George Parros. The NHL responded on Thursday and fined the Rangers $250,000 for public comments criticizing Parros and the league’s department of player safety.

But believe it or not, some good came out of the chaotic incident and surprisingly, it was done by Wilson himself.

According to Darren Dreger, Wilson and Capitals’ captain Alex Ovechkin reached out to Panarin after the game on Monday to make sure the Rangers’ star player was alright. The Russian sniper will miss the remainder of the season with an injury that he sustained in the scrum. Here is how Dreger explained this unexpected update on last night’s edition of Insider Trading:

“Tom Wilson and Alex Ovechkin of the Washington Capitals both reached out to the New York Rangers’ Artemi Panarin just to make sure he was OK after Monday’s collection of incidents. This isn’t unusual despite what some may think of Wilson. He did want to make sure that Panarin was OK, because that did not go the way that Wilson was hoping. Both guys checked in on Panarin — and it sounds like Panarin will indeed be fine. This is evidence that the villain of the week, Wilson, does in fact have a heart.”

As you know, it didn’t help the situation on Wednesday when the Caps and Rangers faced again in a fight-filled game. A line brawl featuring all six forwards erupted on the ice in the opening seconds of the game. Three more broke out in the first period alone, including Wilson taking on Rangers defenseman Brendan Smith. It was madness.

It’s still good to hear that Wilson, surprisingly, had some remorse after his brutal attack on Panarin, for which he barely had to pay.

Rumblings of a one for one trade between the Panthers and Islanders.

Rumor: Rangers should see a change in goal this summer.
Subscibe to
Our NEWSLETTER
Receive the best articles of the web directly in your email