NHL News : Tom Wilson loses it and needs to be restrained by 3 officials as he attacks Rangers

The Caps’ forward was ejected from the game 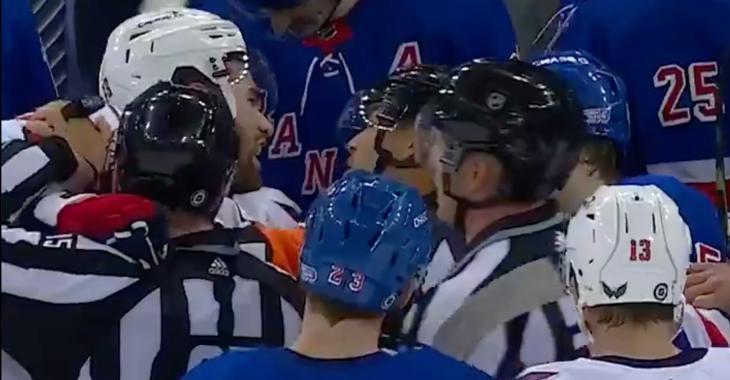 The New York Rangers handed the Washington Capitals a rare loss on Tuesday night, beating the leaders of the MassMuatual division 5-2. And for some reasons, it looks like Caps’ forward Tom Wilson forgot how to lose gracefully.

As the Blue Shirts lead 4-2 and made matters worse as Pavel Buchnevich score a shorthanded goal, Wilson rushed over to the Rangers’ bench as they were celebrated and completely lost it.

He attempted to fight with pretty much every opposing player on the ice and needed to be restrained by three of the four officials before he was ejected from the game with less than a minute left on the clock. Even teammate John Carlson had to jump him and restrain Wilson.

Wilson was not in the mood, clearly to hear the Rangers’ goal horn and song for the fifth time that night.

What a strange player that guy, sometimes he is so fun to watch and other times, like this one, you just wince.