NHL News : Tom Wilson didn’t expect situation to blow up the way it did after incidents with Rangers!

He opened up during his press conference as he announced he’ll play tonight. 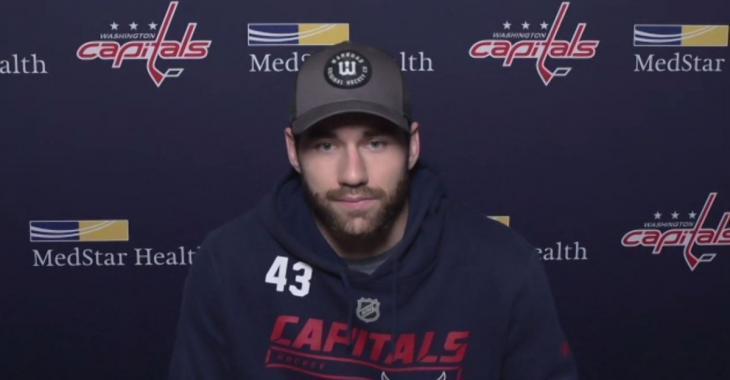 It has been a crazy week in the National Hockey League, especially when it comes to the New York Rangers and Washington Capitals.

Forward Tom Wilson, who sits in the middle of it all, doesn’t know how it got to this. Let’s head down memory lane for him: on Tuesday, Wilson was fined $5000 for punching Rangers forward Pavel Buchnevich in the back of the head as he was facedown on the ice, while also throwing star Artemi Panarin to the ice in the ensuing scrum. As you know since then, the Rangers called out the league and demanded it fired the Head of Player Safety, George Parros. The NHL responded on Thursday and fined the Rangers $250,000 for public comments criticizing Parros and the league’s department of player safety.

When the two teams met again on Wednesday evening, a line brawl featuring all six forwards erupted on the ice in the opening seconds of the game. Three more broke out in the first period alone, including Wilson taking on Rangers defenseman Brendan Smith. It was madness.

While Wilson admitted on Friday morning that he reached out to Panarin after injuring to make sure he was okay, he also stated that he’s looking to move on from these events as he returns to play tonight against the Philadelphia Flyers after leaving Wednesday’s game with an injury.

“It was a crazy moment but one that’s not rare to happen in a hockey game. … I’m trying to move on from it.”

He maintains that there’s nothing he can say to change people’s minds about his actions.

“Nothing I say right now is going to change anyone’s opinion.”

Insider Stephen When added that Wilson considered the other night a routine scrum by hockey standards and didn’t think situation would blow up after he was fined.

That seems a bit dumb to say, we have to admit. After all, the guy is a repeat offender, who was suspended for seven games in March for a hit that injured Boston Bruins defenseman Brandon Carlo. It was the fifth suspension of Wilson’s NHL career, the previous four coming in a 105-game span from 2017-18, which included a 20-game suspension for an illegal check to the head of Oskar Sundqvist of the St. Louis Blues back on Oct. 3, 2018, which was reduced to 14 games on an NHLPA appeal.

But sure, he couldn’t imagine that things would get out of hand…

Worrisome update on Jujhar Khaira straight from Oilers!
Subscibe to
Our NEWSLETTER
Receive the best articles of the web directly in your email