​The season is underway, now get that trade going! 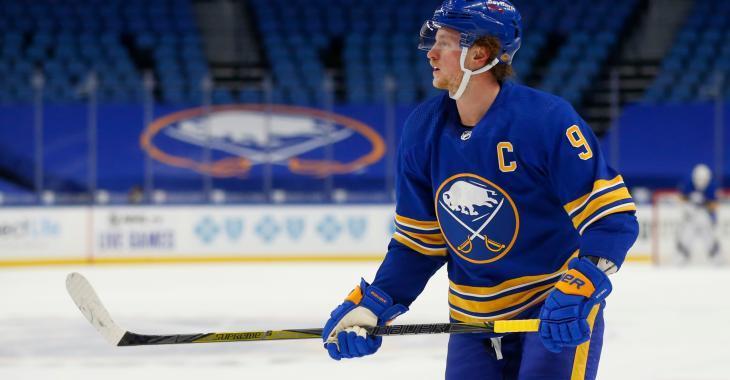 There is some movement finally happening when it comes to Jack Eichel and last week, insider Pierre LeBrun reported that some teams were stepping out of the Eichel sweepstakes, with the Calgary Flames and Anaheim Ducks remaining with strong interest.

However, Lyle Richardson of Spector’s Hockey believes three other clubs could get into the mix, naming the Ottawa Senators, Columbus Blue Jackets and Arizona Coyotes as potential trade partners with the Buffalo Sabres.

“The Ottawa Senators would be a prime candidate but who knows if cantankerous Senators owner Eugene Melnyk would sign off on this. The Columbus Blue Jackets have lacked a true first-line center for years and also possess the assets to swing a deal. The same goes for the Arizona Coyotes, but they might not be keen to take on that big salary.”

He also wonders if the Flames could really pull off a trade for Eichel, seeing that Cap Friendly shows them with just $300K in projected cap space entering this season so they’ll have to dump a lot of salary to take on his contract. Sure, fans could suggest offering Johnny Gaudreau in return, due his UFA status, or Sean Monahan with a year left on his contract, but you have to expect that their respective no-trade clauses could prevent a trade with the Sabres.

For teams still in the mix, Sportsnet’s Elliotte Friedman has reported that there is a willingness to make a move with the type of surgery Eichel is seeking. Eichel favors having artificial disk replacement surgery. The Sabres are against him having the procedure because it has never been performed on an NHL player. However, the Sabres’ way means that a patient could have three surgeries in 20 years. We can understand why Eichel wants to get it done his way.

Here’ the update on this by Friedman from his 32 Thoughts column:

“Everyone’s being very careful about this, but word is that there are four or five teams indicating comfort with Eichel’s preferred disc replacement. There are legitimate attempts to find a solution, but it’s still a challenge. This is a hard deal to make if you’re giving up top picks/prospects, and have to wait through the surgery. The good news is that I think everyone realizes it is time to sort this out.”

Maybe these new candidates will offer GM Kevyn Adams interesting trade scenarios that will get a move going!