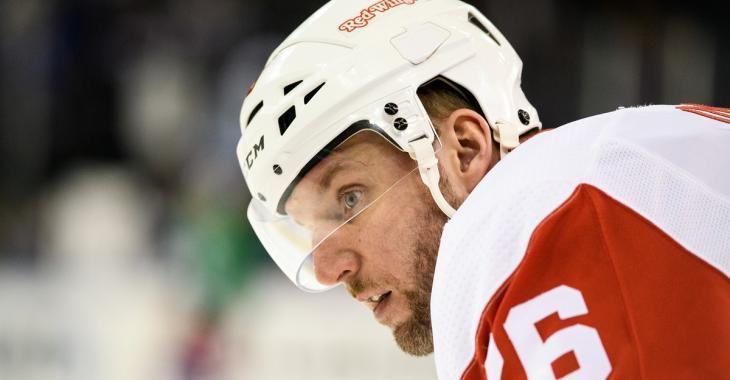 Long time fans of the National Hockey League all know that the league is not what it was even a decade ago, with the game having evolved in both positive and negative ways. Although we as observers have witnessed the game evolve before our very eyes there are some players who have been caught up in the midst of that evolution, players like veteran NHL forward Thomas Vanek.

Vanek was recently a guest on the Instigators podcast where he discussed this very evolution in the game, specifically as it pertains to the defensemen that he has faced throughout his career as a forward in the league. Although I never got the sense that Vanek was in any way being disrespectful, his comments made it clear that he feels defensemen in the modern day NHL, with the notable exception of Bruins captain Zdeno Chara, simply don't match up to some of the names of the past.

"The last 4 or 5 years besides Chara the league isn't that tough anymore, I think we can all agree on that," said Vanek during the podcast.

It seemed funny to me, given that Vanek was no doubt often on the receiving end of the punishment doled out by these men, that he spoke of the old guard of NHL defensemen with such fondness in his voice.

"Early on you had the Pronger's and the Hatcher's... there was no penalties back then. The ref would say 'Hey, loosen up Pronger' and Pronger would look at the ref and was like 'don't ever talk to me again'."

One of the host of the podcast is none other than Craig Rivet, and when Vanek was asked if he had ever had an encounter with Rivet he gave a hilarious response.

"Oh for sure, he had a wooden stick and he didn't know what a puck was, he just knew what the back of my neck was," said Vanek with a laugh.

Vanek never called the modern day NHL defenseman soft, but it's hard not to take that message from the way he contrasted the old guard of defensemen against the new age ones.

"That's the way it was, you go in front of the net you are taking your punishment you know? Now the game has changed. You got a lot smaller defensemen who are more mobile, they crosscheck a little bit but those guys are non existent anymore."

Perhaps Vanek laments the fact that his job could have been much easier had he just been born a few years later, but there's also no doubt some truth to what he is saying.

Rumor: Jack Eichel doubtful to play this season even if he gets traded