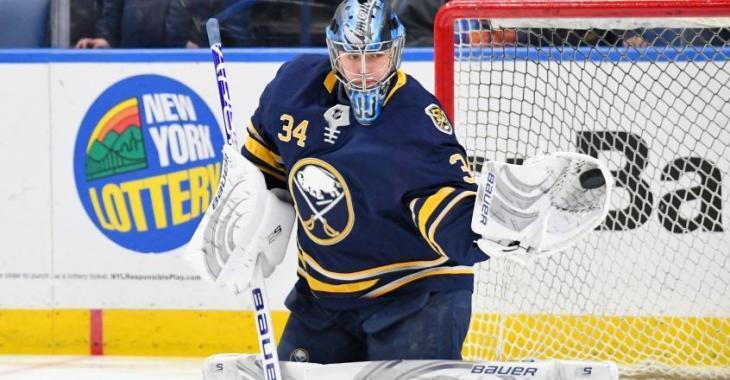 There is an expectation that there will be a lot of players moving out of Buffalo ahead of the trade deadline, but I wonder how many people had goaltender Jonas Johansson on their list of potential trade candidates.

According to National Hockey League insider Elliotte Friedman, the Sabres have in fact traded the 25 year old netminder to the Colorado Avalanche in exchange for what is admittedly a very small return. Friedman initially reported that the deal would be for a "sixth rounder" and we can now confirm that the pick will be a 2021 sixth rounder from the Avalanche.

It is something of a surprising trade given that Johansson has not looked very good during his limited time in the National Hockey League, although it must be said that he plays with the Buffalo Sabres in front of him. His stats this season have been mediocre at best with a 3.79 goals against average and an .884 save percentage over his 7 games played, both numbers that are going to result in your team losing a lot more games than they win. In his previous season with the Sabres he recorded a 2.94 goals against average and a .894 save percentage, which over 6 games played was not much better.

I suspect that what the Avalanche were looking for here was something of a low cost gamble. Giving up a sixth round pick is generally not going to cost you a ton in the long term, and they likely feel that Johansson would look considerably better than he has in Buffalo once he has a chance to take the net with a real NHL team playing in front of him. Whether or not that will prove to be true however remains to be seen.

This almost certainly must feel like a huge win for the player himself who has been in a losing Sabres organization since he was drafted in the third round (61st overall) at the 2014 NHL Entry Draft. Although most of his time since has been spent in Europe and in the American Hockey League, this is likely the best opportunity that Johansson will have to show that he is an NHL ready goaltender. Again, whether or not he can do it remains to be seen.

Buffalo Sabres insider John Vogl certainly does not appear to have any faith in him.

"I can say without hesitation that the Avs are getting the worst goalie I've seen during my 19 seasons covering the Sabres."