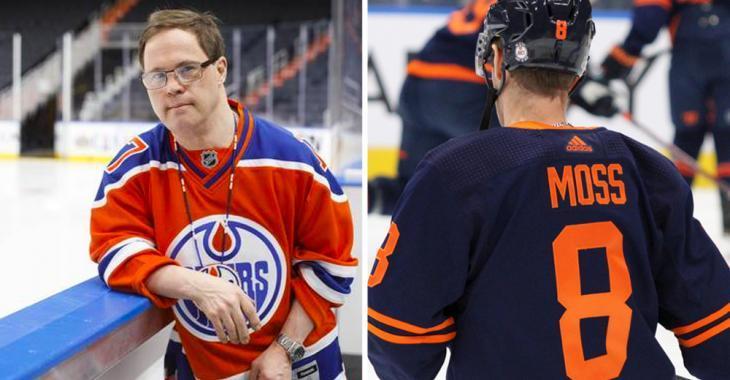 Hockey in Edmonton will never be the same again.

Now, the Oilers are paying tribute to Moss as they prepare to open the 2021 season against the Vancouver Canucks.

Moss was the longest serving member of the Oilers staff, having been employed by the team for nearly 40 seasons. Throughout all the ups and downs of the Oilers franchise, Moss was always there with a smile and a positive attitude no matter the circumstances. Moss’ relationship with the Oilers began in 1980 when his sister began dating Oilers superstar Wayne Gretzky. While the relationship between The Great One and Moss’ sister ended, a lifelong friendship between Moss and Gretzky was born.

It was Gretzky then who, after witnessing Moss struggle to make ends meet and find purpose for himself, approached Oilers general manager Glenn Sather inquiring about a position for the teenaged Moss. The young man seized the opportunity to be around his heroes and help them prepare by cleaning, doing laundry and generally pitching in wherever needed. He hasn’t looked back for a moment.

Three seasons ago when Moss sang ‘O Canada’ to the assembled crowd at Rogers Place prior to game 5 of the Oilers’ first round playoff series against the San Jose Sharks, the entire of the hockey world was introduced to Moss and his passion for the game and the team he loves. He had an infectious enthusiasm and it’s hard not to affected by his raw energy and unbridled passion.

RIP Joey. You were taken from us far too soon, but you'll live on forever in the hearts and minds of Oilers fans everywhere.

Blackhawks sign Bowey, immediately put him on waivers
Subscibe to
Our NEWSLETTER
Receive the best articles of the web directly in your email