NHL News : The NHL and the Flyers react to Lehner's allegations against Alain Vigneault.

The NHL and the Flyers react to Lehner's allegations against Alain Vigneault.

The league and the Flyers have acted. 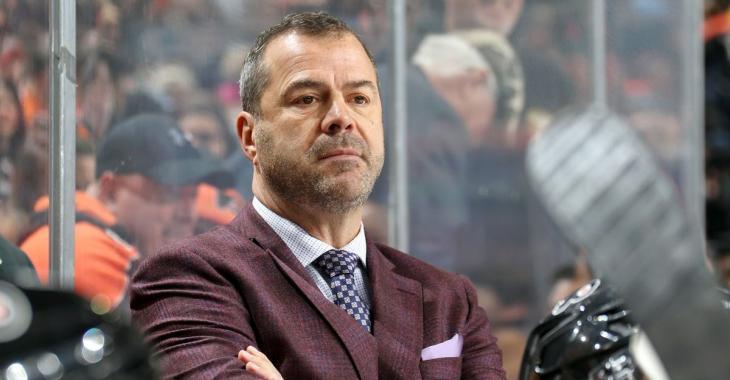 On Saturday, Las Vegas Golden Knights goaltender Robin Lehner dropped a bombshell on the hockey world when he accused several unnamed teams in the National Hockey League of recklessly handing out dangerous prescription medications to their players. Lehner did not call out any team by name, other than to say that the Golden Knights were not among that group of teams, but he did go out of his way to specifically name Philadelphia Flyers head coach Alain Vigneault.

Lehner not only called Vigneault out directly by name, but he also went on to label the veteran head coach a "dinosaur" before calling for his outright termination as a head coach in the NHL.

Unsurprisingly this has now prompted a response from both the league itself and from the Flyers organization where Vigneault is currently still coaching. As you would expect with a large corporate entity like the NHL the responses from both were rather predictable. In the case of the Flyers it was a blanket denial that came from Flyers general manager Check Fletcher.

"The health and well-being of our players is our top priority, and any care provided to them comes from the team’s health care professionals, not the coaching staff," said Fletcher on Sunday. "We have no reason to believe any of our players have received improper care."

The league on the other hand has yet to issue a statement and instead there is now word that they have reached out to Robin Lehner himself in order to set up an interview with the player. Any statement from the NHL will likely hinge on how that interview with Lehner unfolds as well as the quality of the evidence that he claims to have supporting his accusations.

Lehner has stated quite clearly on social media that he does have "proof" of the accusations he has levied, even going so far as to challenge Vigneault to "shake" his way out of this mess. Even when fans have asked him openly about whether or not he is able to share that evidence, Lehner has stated that he can.

If Lehner can back up his claims you can rest assured that heads will be rolling as a result of this investigation.