NHL News : The latest on the rumors of a Brady Tkachuk offer sheet.

Teams smelling blood in the water? 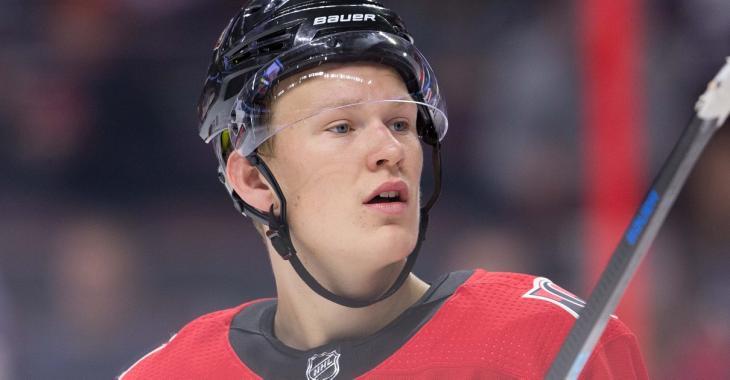 Late last month the Carolina Hurricanes pulled off what has to be one of the biggest moves in recent National Hockey League history when they successfully tendered an offer sheet to Montreal Canadiens centerman Jesperi Kotkaniemi. It was the first time an NHL team failed to match an offer sheet in over a decade, with the last time player was swapped from team to team in this manner harkening all the way back to 2007 when Dustin Penner signed an offer sheet with the Edmonton Oilers.

As a result of what has been a monumental development in the NHL there has been considerably more talk about offer sheets this offseason, no doubt due at least in part to the league's salary cap remaining relatively flat. One of the names that has routinely come up in offer sheet talk has been that of forward Brady Tkachuk of the Ottawa Senators, one of the top restricted free agents this summer and a player that at the time of this writing still remains unsigned.

This week NHL insider Elliotte Friedman was asked about the rumors surrounding Tkachuk on his latest podcast and he was relatively quick to shut them down. To be clear Friedman was not saying that there wouldn't be an offer sheet coming the Ottawa Senators way, but rather that none of his sources had informed him of any such move being on the horizon.

"I don't know, it's a good question," said Friedman on his podcast.

That of course raises the question, where are these rumors originating from? Well Friedman's co-host Jeff Marek may have had some insight into that particular topic, and it sounds like it may have something to do with the reputation of Ottawa Senators' owner Eugene Melnyk.

"Ottawa with Tkachuk.... that to me would be an obvious one," said Marek. "Just because and again this may go to what offended Carolina in the first place with the [Sebastian] Aho offer sheet which is reputational, just to be blunt, cheapness. There's the test 'Oh is Eugene gonna pay this. If we submit a one year, high money, offer sheet to Brady Tkachuk, will the Senators match it?'"

I think it's a fair question to ask, and if Marek is correct it may be one that some NHL teams are asking themselves internally.

Report: Leafs continue to make cuts, assign two players to AHL
Subscibe to
Our NEWSLETTER
Receive the best articles of the web directly in your email