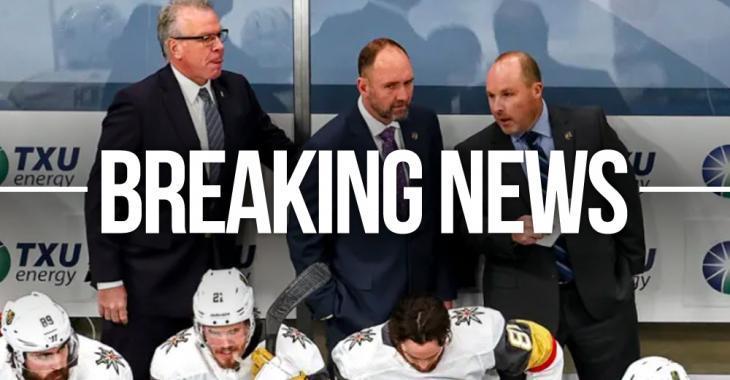 Sportsnet’s insider Elliotte Friedman has just reported that, out of “an abundance of caution,” the Vegas Golden Knights will be isolating their coaches. General manager Kelly McCrimmon will take over, likely with the team’s AHL staff.

The Golden Knights host the St. Louis Blues tonight as defenseman Alex Pietrangelo is set to face off against his former team.

McGrimmon has a ton of coaching experience, he who was the bench boss for the Brandon Wheat Kings of the Western Hockey League. He also spent a few years coaching Junior Hockey in the  SJHL, starting with the North Battleford North Stars  for two seasons, then one with the  Lloydminster Lancers, before becoming assistant coach with the Wheat Kings.

This will be his NHL debut. McCrimmon will be joined by members of the AHL's coaching staff behind the bench.

According to TSN's Darren Dreger, there has been at least one positive test among coaching staff means all have to observe COVID protocol.

As of now, the game is still on tonight's schedule.

The Golden Knights have won five of their six games this season under head coach Peter DeBoer.

Flashback: Roberto Luongo recalls his infamous 2007 bathroom break
Subscibe to
Our NEWSLETTER
Receive the best articles of the web directly in your email