NHL News : The 5 worst goalies in the NHL this season... so far.

Some pretty bad performers this season. 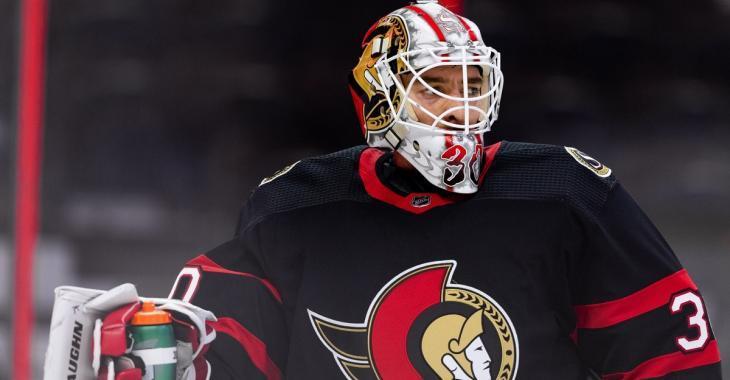 This has been a rather strange season for the National Hockey League with drastically different parameters than we normally expect from a regular season in the NHL. These unusual circumstances have allowed some players in the league to elevate their game to the next level, but in many cases the exact opposite has happened as well with some having low points in their respective careers.

Perhaps no one has been hit harder this season than the goaltenders, a position that is of huge importance to every team and one that several teams have seen falter during their regular season. Although there are sadly plenty of bad goaltenders to choose from this season, today we'll be looking at the top 5 worst goalies in the league this year. These goalies were ranked in order of their goals saved above expected per 60 and in every case it's pretty dire.

Here they are in order from the worst of the bunch.

It feels a little bad putting Hogberg here given he has only made 10 appearances all season long but his 4.34 goals against average and .859 save percentage certainly suggest that he belongs on the list. I will say in his defense that he does play for the Ottawa Senators, one of the worst teams in the entire league, which no doubt has contributed to his poor performance this season.

Speaking of the Ottawa Senators, coming in second with a -1.099 goals saved above expected per 60 is Hogberg's teammate Matt Murray.

Murray definitely belongs on the list having made more than twice as many appearances as Hogberg with 22 on the season, and his 3.84 goals against average and .880 save percentage aren't much better. The expectations on Murray were much higher which hurts his case as well, although like Hogberg this has to be tempered by the fact that he plays for the Senators.

Hart's -0.967 goals saved above expected per 60 may come as something of a surprise to those who didn't pay close attention to the Flyers this season.

Hart looked like the answer to the Flyers long lingering goaltending problems in his first two seasons, but the same cannot be said this time around. His 3.92 goals against average and .871 save percentage over 23 appearances this season has no doubt play a huge role in the Flyers finding themselves outside of the playoff picture at this time.

Coming in 4th with a -0.921 goals saved above expected per 60 is Anaheim's Ryan Miller.

The veteran has struggled with the Ducks this season recording a 3.60 goals against average and an .882 save percentage over his 14 appearances and at 40 years of age I think its ok to ask how much Miller has in the tank. Again it is no coincidence that every goaltender on this list finds themselves on a team currently outside of the playoff picture, and Miller here is no exception.

Last but not least is Thomas Greiss whose -0.872 goals saved above expected per 60 is a decent improvement over the other names on this list.

Greiss like the other 4 on the list plays for a losing team. That being said his .895 save percentage and 3.21 goals against average over 25 games is an improvement over the other 4 mentioned here today and that's gotta count for something.

John Tavares re-joins the Leafs, issues a public message
Subscibe to
Our NEWSLETTER
Receive the best articles of the web directly in your email