NHL News : 3 teams left in the running to acquire Dubois!

Trade is imminent! Where will he end up? 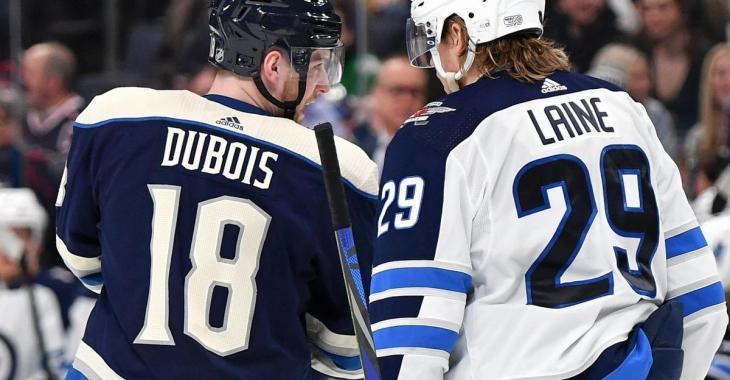 Earlier on Friday night, it was revealed that the Columbus Blue Jackets were closing in on a trade for forward Pierre-Luc Dubois as TSN’s Darren Dreger first reported that the team was working hard at settling this tonight or tomorrow morning.

While Dreger admitted it was hard to say who remained a contender for Dubois’ services, Michael Russo of The Athletic was able to confirm they the Minnesota Wild had been told they were out of the Dubois trade sweepstakes.

When rumours started surfacing about Dubois, more than 12 teams had checked in on the 22-year-old forward, many of whom had expressed significant interest in acquiring him. The Anaheim Ducks, Winnipeg Jets, Montreal Canadiens, Calgary Flames, New York Rangers, Minnesota Wild, Ottawa Senators, Buffalo Sabres, Philadelphia Flyers, Detroit Red Wings, Washington Capitals and Arizona Coyotes were among those teams interested.

It was then revealed that the Blue Jackets have a preference to send Dubois to a Western Conference club. This would mean that Dubois’ preferred destination to the Montreal Canadiens would be out of the cards for him, along with the Rangers, Senators, Sabres, Flyers, Red Wings and Capitals. Funny enough, we haven't had a true sense of the Eastern and Western conferences this season with the new realignment...

Pierre LeBrun revealed later that the Canadiens were still in the mix.

According to Dreger and his colleague Pierre LeBrun, the Winnipeg Jets are believed to be amongst the team who could still acquire Dubois. LeBrun in fact pointed out that Columbus would be a natural landing sport for Winnipeg Jets forward Jack Roslovic in a potentially larger deal, which could include Patrik Laine.

“Assuming Laine is the headliner but would make sense for the Jackets to want Roslovic as well. Let’s see where this goes,” LeBrun tweeted.

LeBrun also reports the Anaheim Ducks are still trying for the centre’s services, who have been in on the sweepstakes from the beginning. The Ducks do have an interesting prospect pool of high-quality prospects including center Trevor Zegras and defenseman Jamie Drysdale.

In a quick blog, Sportsnet's Elliotte Friedman also confirmed that Anaheim is believed to have significantly increased its offer.

We could feel things were coming to an end for Dubois in Columbus after he was  benched  for the majority of Blue Jackets’ game, playing just 3:55 in a 3-2 OT loss against the Tampa Bay Lightning.

After the game, the 22-year-old forward declined interviews from reporters, but took ownership for his benching after practice on Friday. He acknowledged he wasn’t playing at his usual high level and that he needed to step up his game.

It has however been confirmed that he will be a healthy scratch for tomorrow’s game against the Bolts - if he is still a member of the Blue Jackets by then.

More to come, obviously, though many believe the trade could take place Saturday.