Win for him, boys! 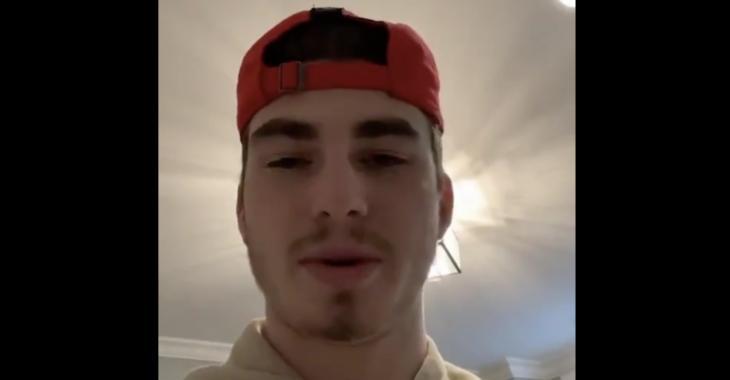 While this is an exciting night for all Canadian and American fans out there as the Gold medal game of the World Junior Championship, it is bittersweet for the sidelined captain Kirby Dach.

Dach has been out of the 2021 World Juniors after suffering a wrist injury in a pre-tournament game against Russia. The Blackhawks talented prospect headed back to Chicago to undergo further examination by team doctors and underwent surgery for his gruesome injury. He got injured on a harmless bodycheck in the neutral zone in the third period of the preliminary game against Russia. Right after contact, the young captain pulled off his glove, skated off the ice and went directly to the locker-room area. During an interview with TSN, Dach revealed that he heard a sound and thought he had broken his stick, but it was in fact his wrist.

Ever since, he has encouraged his teammates from his bed and on Tuesday night, he shares heartfelt message for the team ahead of the big game against Team USA.

"I wish more than anything that I was out on the ice with you guys and battling for that medal, so go get it done."

You know he will be watching and supporting his teammates tonight!

We can only imagine what Dach would have brought to this already incredible team if he hadn’t gotten injury at the start of the tournament. It was heartbreaking for Dach who was so excited to represent his country for the first time as he was not loaned to the team when the Canadians captured gold last year in the Czech Republic. The Blackhawks are now struggling on depth without his services on top of losing captain Jonathan Toews who announced today he would miss the season with an unknown illness.

Let’s hope Dach can get some joy tonight with a Team Canada win!

NHL players rushing back to America from Europe!
Subscibe to
Our NEWSLETTER
Receive the best articles of the web directly in your email