Does this rule out a return with the Bruins? 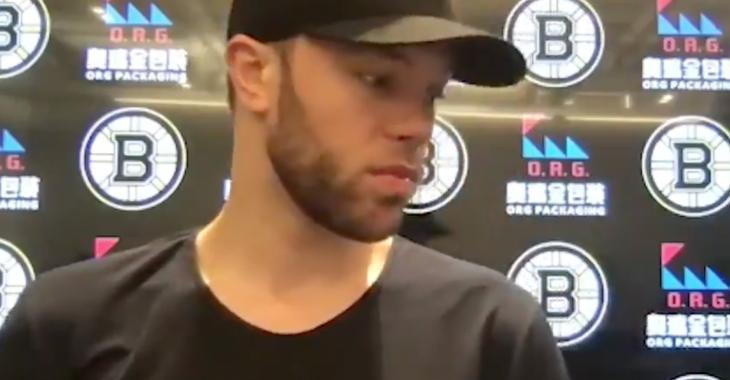 We all remember when Taylor Hall signed as a free agent this past summer, agreeing to a on a one-year, $8 million deal with the Buffalo Sabres. The guy was clearly after money, hoping to perform well and get more the following year, wherever that may be. However, the Sabres did poorly and were big seller at the trade deadline, moving Hall to the Boston Bruins, where he found immediate success.

While he is adamant about wanting to return to Boston, he also made it clear that he has new priorities as a free agent this time around, stating he will prioritize fit with a team over money as he hits unrestricted free agency for the second straight year this summer.

“I’m not looking to absolutely maximize my value at this point. It’s about being a good fit rather than money or a long-term thing,” Hall said. “I just want to find a good home for the next few years.”

During his postseason run, Hall made comments on a potential contract with the Bruins and this is what he told ESPN at the time:

“I don’t even know what my worth is right now, honestly. I’m not worried about my contract right now, it’s something we’ll figure out in the summer. I have much bigger things to worry about as a player, as a teammate.”

Now that the Bruins have been eliminated from the postseason, Hall will get a chance to focus on a deal and we will see if the Bruins decide to bring him back.

Hall has 228 goals and 596 points in 680 career games since being selected first overall by the Edmonton Oilers in the 2010 NHL Draft. This was just his third time reaching the postseason in his 11-year NHL career this season.

Fans and pundits saw that he fit into the Bruins’ group and mentality, however, if GM Don Sweeney offers less money than what he hopes, his priorities may change all over again…