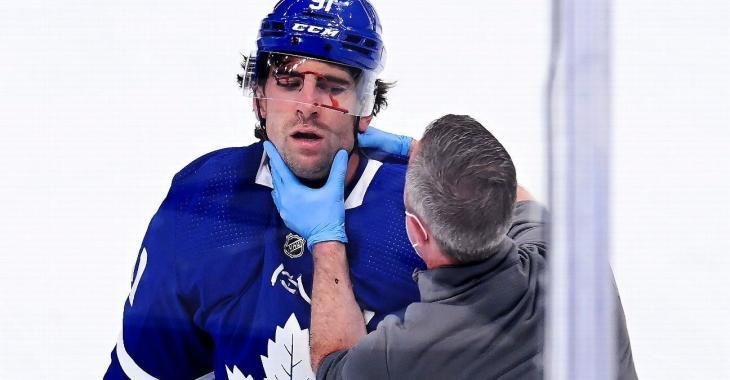 We hear from John Tavares and we can breath a sigh of relief.

On Friday afternoon, the Toronto Maple Leafs captain shared a message to fans on his Twitter account to let everyone know how he feels following last night’s horrific incident.

As you know, Tavares was taken off the ice on a stretcher after a collision early in the first-round playoff matchup with the Montreal Canadiens. It was a freak accident: Tavares bumped into Habs defenseman Ben Chariot, fell to the ice where he was defenseless and hit by forward Corey Perry’s knee. Trainers and doctors from both teams rushed to the ice and attended to the veteran forward before he was taken away. He gave a thumbs up as he was wheeled off the ice and transported to hospital.

The game was halted for several minutes. A game which the Canadiens won to take the 1-0 lead in the series.

He was thoroughly examined and assessed by a neurosurgical team at St. Michaels Hospital and the club’s medical director. It sounds like the results of this assessment was positive enough to get Tavares back home with his loved ones. But he will remain out indefinitely.

Tavares confirmed all of this in his statement he posted on his social media accounts. It was important for the Leafs' captain to thank everyone who helped him get off the ice and took care of him during the scary incident:

While Tavares does not hint at a possible return date, it sounds like he is aware the recovery process could be long seeing that he admits that he will be cheering on his teammates as they compete in the Stanley Cup playoffs.

On Friday, head coach Sheldon Keefe confirmed that Tavares had sustained a concussion. We all know how uncertain the length of recovery for this type of injury can be, especially with the immense impact on the captain's head at game speed.

“He texted us last night and said he was feeling better … There are some things bigger than hockey,” said Matthews.

Morgan Rielly spoke with Tavares this morning, who gave his defenseman some great motivation.

“He wants nothing more than for us to win.”

Here's hoping for a speedy and full recovery for JT.

ICYMI: Bruins GM Don Sweeney announces his new captain.... Brad Marchand?
Subscibe to
Our NEWSLETTER
Receive the best articles of the web directly in your email