NHL News : Tarasenko and his agent not happy about O'Reilly being named captain.

The Blues star stirs up controversy. 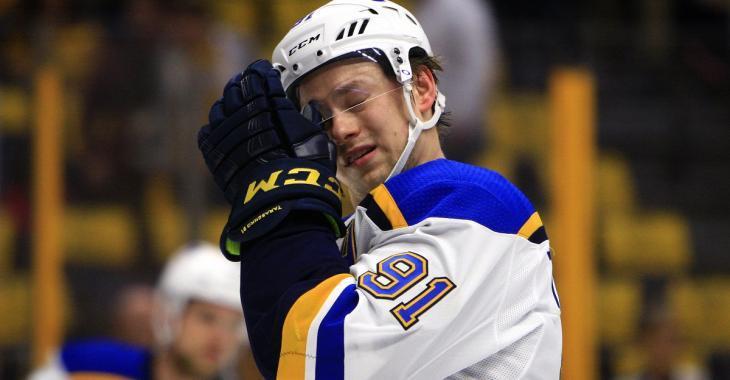 St. Louis Blues star forward Vladimir Tarasenko and his agent have just stirred up quite the controversy around the captaincy of the St. Louis Blues locker room.

The controversy began when Alexey Dementyev, the agent that currently represents Tarasenko, reacted negatively to the news of the appointment of Blues forward Ryan O'Reilly as captain. To be fair here Dementyev had no bad words to say about O'Reilly himself but, according to Russian outlet Championat, he was harshly critical of the decision to make him the next captain of the Blues.

"I have nothing against Ryan O'Reilly, he is a worthy player who has proven a lot in hockey and the NHL. I was more surprised by the non-appointment of Vladimir Tarasenko as captain. To be completely honest, one must understand that before he joined the team, few people would have thought that the Blues would win the Cup. It is clear that the Cup is a merit of the entire team, including the management, but Vladimir spent eight bright seasons, went out to play injections, with fractures and other contraindications, really led the team," said Alexey Dementyev as per Championat.

That would be bad enough on its own but Tarasenko himself has since responded to comments from his agent in the Russian media and I think you would be hard pressed to argue that Tarasenko has helped matters. The Blues forward correctly notes that this is not a good time for locker room drama, but in same breath refused to distance himself from the comments made by his agent.

"I think it's okay to count on certain leadership positions after eight years at the club. But everyone has their own opinion, Alexey Dementyev expressed it and has every right to do so. This is probably not the time for intrigue. I personally focus on recovering from injury. We need to start showing our hockey and get better. Because there are many people who say that Tarasenko will never play the same way. I have a huge incentive to return and prove that these people were wrong," said Tarasenko as per Russian outlet Sport24.

It certainly sounds like Tarasenko was expecting to be named the next captain of the Blues but I have no doubt that these comments in the media will only further serve to convince the Blues that Tarasenko was not the right choice for the "C". The highly talented Russian forward is currently sidelined due to injury and with him not having played in so long I do wonder how these comments will be received in St. Louis.