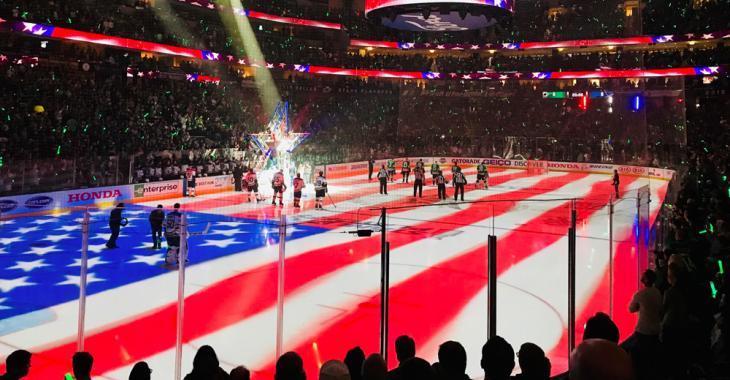 In case you missed the news earlier this week, the NBA's Dallas Mavericks elected to stop the tradition of playing the 'Star Spangled Banner' prior to home games at American Airlines Center. This led to a bit of a protest from the team's fanbase and ultimately resulted in the NBA instituting a policy that makes the playing of the national anthem mandatory for all 30 teams.

Suffice it to say, this touchy subject has brought out a lot of emotions from sports fans.

Personally, I enjoy the tradition of the national anthem being played prior to a sports game. Some of my fondest memories are standing for 'O Canada' or the 'Star Spangled Banner' prior to a big hockey game. The feeling in the crowd can be absolutely electric and it sets the stage for an exciting game. Having said that, I can understand why not everyone feels the same. Add in the fact that teams are now literally forced to play the national anthem and... well doesn't that kind of defeat the purpose? To be perfectly honest, it's a complicated situation and I'm not sure exactly where I stand on the issue.

The Dallas Stars, however, don't seem to think things are so complicated. The Stars, who share American Airlines Center with the Mavericks, issued a statement earlier today announcing that they will play the 'Star Spangled Banner' prior to every Stars home game, as they've done since the team arrived in the city back in 1993.

So... nothing changes? Business as usual? Way to make a statement, guys...

I gotta say, this comes across as nothing but political grandstanding by the Stars. Why even make a statement? Just play the anthem as you've been doing for nearly three decades now and mind your own business. Why issue a statement that's essentially just a backhand slap to the team that shares arena facilities with you? Also, have you seen who owns the Mavericks? It's Mark Cuban and if there's one guy in the sports world I wouldn't want to piss off it's Mark Cuban... especially when his office is in the same building.

Then again... what do I know? Again, it's a complicated issue. Thoughts, Stars fans?