Yzerman has been a class act for a long time.

Published on Sunday, February 21 2021 by HockeyFeed in NHL News 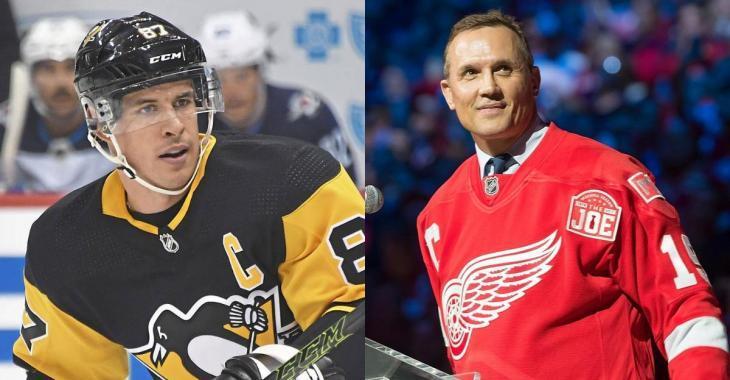 Saturday night was a very special one in the life of Pittsburgh Penguins superstar Sidney Crosby as it marked his 1000th career game in the National Hockey League.

The night was filled with special moments for Crosby as he was honored by his teammates during the warmups, honored through a video tribute put together by the Penguins, and showered with some extremely cool swag including a mosaic of 1000 different photos from his career that was nothing short of breathtaking.

In my estimation however the most special moments of the entire affair where when the tributes from Crosby's rivals began to poor in, a sign that he had not only earned the respect of the Penguins organization and fans, but of the league's very best from just about every team across the league. Tributes from players like Alex Ovechkin, John Tavares, Steven Stamkos, Patrick Kane and many, many, more poured in, but there was one that may have been extra special for Crosby himself.

Among the tributes from opposing teams came one from Detroit Red Wings general manager Steve Yzerman, who is of course also a legendary NHL player in his own right. So legendary in fact that as Crosby was growing up, Yzerman would become the player that he would idolize for both the way he carried himself on the ice as well as for the tremendous class and grace he showed off the ice.

Following the game Crosby was asked specifically about what the tribute from Yzerman had meant to him, and Crosby's response revealed that Yzerman has been offering "Sid the Kid" words of support for a very long time.

"Yeah it was really special. You know he was a role model for me growing up, loved the way he played the game and carried himself.... I remember my first year I was really excited to be playing against them and at the time he had an eye injury and he didn't play that night. And I remember getting on the bus after the game and I got a call and it was from him just saying that he'd wish he had been able to get out there that night and play against me. Wished me all the best and good luck."

That moment, Crosby revealed, only served to heighten his respect for the legendary Red Wings captain. No doubt making his appearance in that tribute video on Saturday night all that much more special.

"I was always a big fan but it was just an unbelievable move and a lot of class, and it is something I will always remember. So it was pretty, pretty, special seeing him here on a video tonight."

Update: A few have asked us for the video, so here it is! You can catch the question that leads to this answer roughly 20 seconds into the video below.