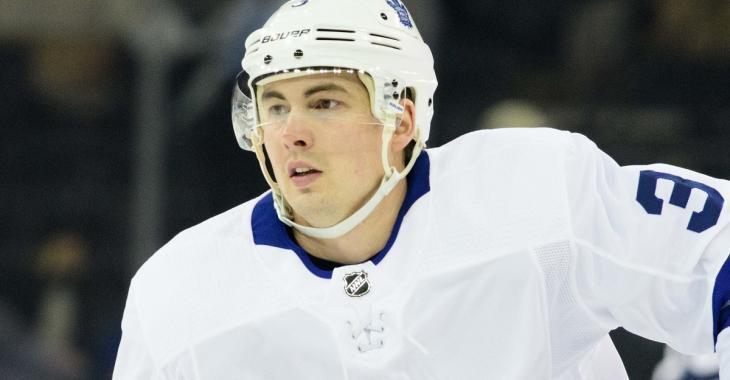 The Toronto Maple Leafs hit the ice for a routine skate on Sunday morning and there were a few notable events that caught the eyes of concerned fans in Toronto.

Perhaps the biggest incident of the day came when star forward Auston Matthews took a shot off the side of his right leg and looked a little worse for wear after the fact. Although he appeared to be in some pain, Matthews appeared to be fine after laboring on the ice for a little bit and resumed practice with his teammates. This is an indication that it was a relatively minor discomfort and nothing to be too worried about.

According to Leafs reporter Kristen Shilton it was defenseman Rasmus Sandin who was the man that fired the shot that struck Auston Matthews, and likely no one was more relieved to learn that he was ok than Sandin himself.

There was also some concern after goaltender Jack Campbell made an early exit from the practice on Sunday, but head coach Sheldon Keefe would go on to clarify that he was merely looking to give Campbell some extra rest given that he is expected to once again take the net for the Leafs tomorrow when they will face off against the Montreal Canadiens for the first of 3 games against that team this week.

Keefe was also able to provide an update on the injured Justin Holl who left Saturday's game against the Vancouver Canucks after taking a pretty hard shot to the face while making a play on the puck. Holl managed to block the puck with his stick but an unfortunate deflection caused the puck to smash into his face, a situation that left him "bloody" according to comments made by Keefe on Saturday night.

Keefe confirmed that Holl would be out for at least one game against the Montreal Canadiens but did go on to add that his player was "doing well" in spite of the fact that he is dealing with an injury that he described as "uncomfortable."

As for goaltender Frederik Andersen, Keefe confirmed that the veteran netminder would not be traveling with the team to Montreal which would appear to indicate he will be out for at least another week.