NHL News : Scott Sabourin ejected during the first shift, of his first game, with the Marlies.

Sabourin ejected seconds into the game. 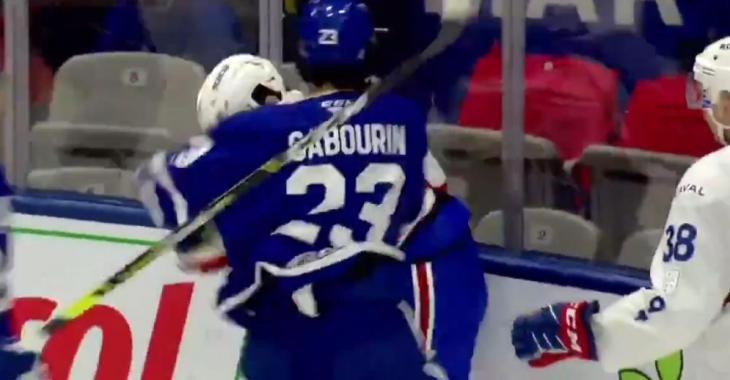 You may not approve of his methods, but there is no denying that after just a single game in the American Hockey League with the Toronto Marlies, Maple Leafs forward Scott Sabourin has made an impression on the team that signs his paycheck.

Following his crushing of Primeau, the Rocket's players were understandably upset, and as a result two of them decided to skate up to Sabourin and give the enforcer a piece of their mind, big mistake. Now I don't believe for a second that the Rocket's Lukas Vejdemo had any intention of fighting an enforcer with National Hockey League experience, but Sabourin was not taking any chances with two players in his face and immediately went on the offensive. The Leafs forward dropped his gloves to the ice with just 23 seconds off the game clock and began to pummel Vejdemo with a series of stiff looking punches, something that Vejdemo was clearly not happy about after the officials separated them.

As I said it made an impression on someone watching from the big club because Sabourin has since been called up by the Maple Leafs, perhaps in anticipation of their match up against the Ottawa Senators this weekend, Sabourin's former team.