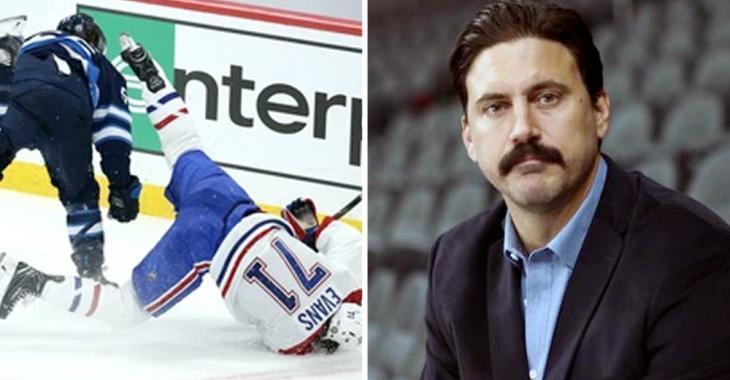 On Monday night, the Winnipeg Jets’ season came to abrupt end as the Montreal Canadiens completed the sweep in overtime. And there’s nothing star forward Mark Scheifele could do about it…

Scheifele was suspended four games by the NHL Department of Player Safety for charging Habs forward Jake Evans in the third period of a 5-3 loss in Game 1. The Jets never got over his loss as the team’s offense dried up without Scheifele. During the team’s end of season press conferences, Scheifele added this:

“I thought I was going to be tried to be shut down by Phillip Danault and it was the department of player safety that shut me down so that definitely sucks.”

This is what might have prompted insider Don Brennan of the Ottawa Sun to claim that while Scheifele deserved a suspension, the length of it was too long for what the Jets’ forward deserved and that the head of the NHL’s Department of Player Safety George Parros did so to help his former team, the Montreal Canadiens.

This is how he sold his article: CRACKS OF DON: Parros helps out his old team with suspension to choirboy Scheifele that is three games too many

In his article, he maintains that Parros therefore helped the Habs to win the second-round series and could even be nominated for the Conn Smythe trophy.

Brennan believes a two-game suspension would have been more than enough for Scheifele’s move as the Jets’ forward isn’t a repeat offender, but that Parros handed him more games since he ended his NHL career in 2014 as a member of the Canadiens.

That’s quite a statement from the reporter, who didn’t shy away from criticizing Parros in Scheifele’s favour.

What do you make of these allegations?