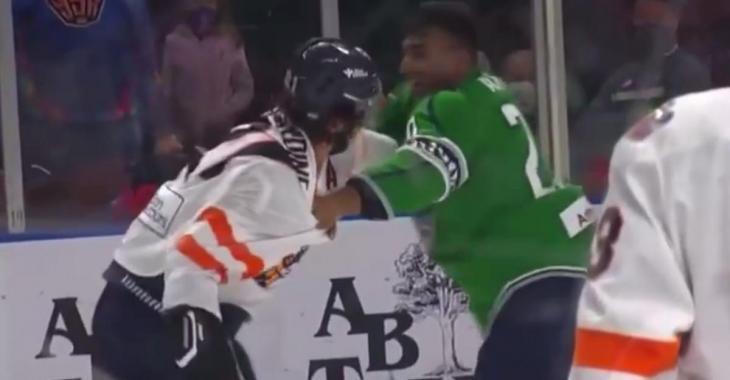 You don't see many scraps like this one in the National Hockey League these days but thankfully they still remain somewhat common in some of the lower tiered leagues.

This one comes to us courtesy of the ECHL and it took place during a game between the Florida Everblades and the amusingly named Greenville Swamp Rabbits. The two combatants in this one were Sam Jardine who you will see wearing the white and orange of the Swamp Rabbits and Arvin Atwal of the Florida Everblades and first and foremost I want to commend both guys for being absolute warriors in this one.

The two men squared off during the final moments of the game's second period and if the reaction from both the broadcasters and the fans who were in attendance is anything to go by, this was a fantastic back and forth affair. Both men traded heavy blows and although there were some attempts at defense early on in the exchange, all that eventually went out the window as both men began trading punches like a pair of Rock'Em Sock'Em robots.

The craziest part of this exchange to me was the look on the face of Atwal. Although he had taken several heavy shots from Jardine during the exchange you could clearly make out an ear to ear smile on his face, a sign that he was loving the entire experience despite getting hit. I suspect that both of these men will walk away from this one with a newfound respect for one another, and no doubt that will be true of the fans who saw it live or got to watch this one on the replay.

On a final note, although he has never played in the National Hockey League some fans in Chicago may remember Sam Jardine. He was drafted in the sixth round (169th overall) of the 2011 NHL Entry Draft by the Chicago Blackhawks and even played a few games for their affiliate in the American Hockey League, the Rockford IceHogs. He also had a brief stint with the Toronto Marlies in the AHL before joining the Swamp Rabbits in the ECHL.