NHL News : Sabres to pull Taylor Hall out of lineup until trade deadline?!

The rumour is heating up! 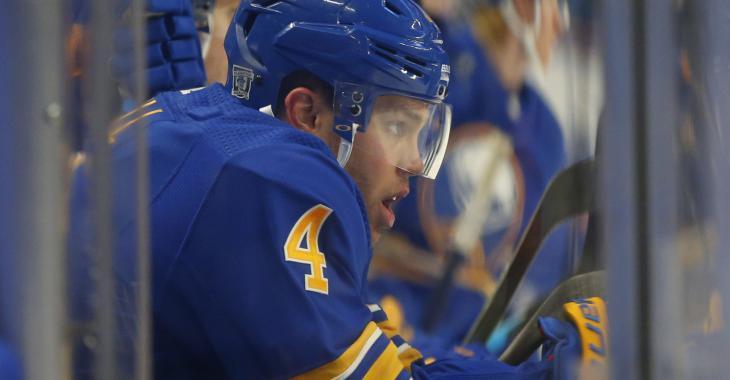 The Buffalo Sabres are pitiful at this point. On Monday night, the team led 3-0 over the Philadelphia Flyers before crumbling down and losing 4-3 in overtime. They saw their winless skid extended to 18 games, a record nobody wants to have…

With the team now 22 points out of a playoff spot in the East Division, insider Pierre LeBrun of TSN and The Athletic asked a very understandable question: will the Sabres choose to pull Taylor Hall out of their lineup ahead of the April 12 trade deadline? They could decide to do so to to protect him against injury.

There is no doubt that the Sabres will - once again - be out of the playoff picture and we expect general manager Kevyn Adams to sell off some priced trade chips ahead of the April 12 deadline. One player that is looking for a chance to compete some more in the postseason is Hall, and while he mentioned several times in the past months that he’d be willing to sign an extension in Buffalo once his one-year, $8 million deal comes to an end, he recently revealed he would for sure listen if approached by his GM that another team is interested in trading for him before the deadline.

On Tuesday night, Darren Dreger revealed this about a potential trade during Insider Trading on TSN:

“The agent for Taylor Hall, Darren Ferris, spoke with Kevyn Adams, the general manager for the Buffalo Sabres, on Monday. Obviously, they talked about a variety of trade scenarios that might be directed at Taylor Hall. There are some that have some interest in a trade and sign.

Kevyn Adams is wrestling on what the return should look like and as you get closer to the April 12 trade deadline, he becomes less of a cap hit so maybe there’s some upside in that. Maybe the price stays at what the ask might be at this stage.”

Hall been in the league over a decade now and suited up in a mere 14 playoff games. He wants more before his game declines - more than it already has. He has just two goals and 16 assists through 34 games in his first season in Buffalo.

Last week, Elliotte Friedman explained how he does not believe the Sabres will demand a first-round pick in return for Hall, who commanded that much and more when he was traded from the New Jersey Devils to the Arizona Coyotes in 2019. He therefore becomes more affordable for many contenders out there. LeBrun mentioned that a first-round pick was the initial asking price for Hall, but could be tough to get in this buyer’s market.

The Sabres started making moves on Friday when they traded veteran Eric Staal to the Montreal Canadiens in exchange for 3rd and 5th round picks in the 2021 NHL Draft.

The next move could be to pull Hall from their active lineup in order to keep him healthy for his new team ahead of the deadline.

Habs pull Danault’s offer off the table, could see him test free agency
Subscibe to
Our NEWSLETTER
Receive the best articles of the web directly in your email