NHL News : Sabres refute Eichel's comments, claim he has not demanded a trade and there is no disconnect

GM Kevyn Adams and captain Jack Eichel clearly aren't on the same page. This is such a mess. 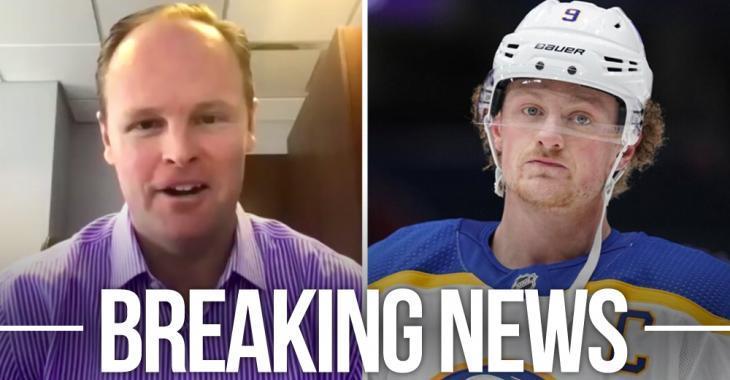 Buffalo Sabres general manager Kevyn Adams met with the media earlier today to summarize his team's season and to address rumors that captain Jack Eichel wants out of town. In case you missed Eichel's comments yesterday, he stated that there's a "disconnect" between him and the Sabres organization regarding a neck injury that he suffered and that his focus is on getting healthy for next season "wherever that may be."

“I’ve been a bit upset about the ways things have been handled since I’ve been hurt. There’s been a bit of a disconnect between myself and the organization. The most important thing now is to get healthy and be ready to play hockey next year, wherever that might be.”

"I have a lot of thinking to do in this offseason. I think that there's a lot that I have to consider. But for now, obviously, I'm here."

Specifically, Eichel says that he isn't happy with how the team has handled his request to have surgery due to an ongoing neck injury. The team is reportedly hesitant to pull the trigger on the surgery, while Eichel and his doctor are pushing to get the surgery done this offseason.

So... as you might imagine all eyes were on Adams during his media availability earlier today. Has Eichel demanded a trade? What's the deal with the surgery? Is the relationship between the team and Eichel too damaged to repair?

Check out these quotes from Sabres insider John Vogl:

I've got to say... I'm not sure I'm buying what Adams is selling, but he's a damn good salesman. I mean... what is the guy going to say? "Yeah, Jack wants out so I'm going to trade him ASAP, hit me up." Not a chance. This is a guy who, to me, is clearly trying to protect an extremely valuable trade asset in Jack Eichel. I'm much more willing to listen to Eichel's words than Adams' words when it comes to Eichel himself. If Eichel says there's a disconnect and that he's not happy with the organization, I'm inclined to believe him. When Adams says there's no disconnect and that Eichel hasn't demanded a trade, I see a GM who is just trying to do the best job he can. Tough spot for the rookie GM, here's hoping he gets good value for an incredibly talented player in Eichel.