You never know what training camp will bring. 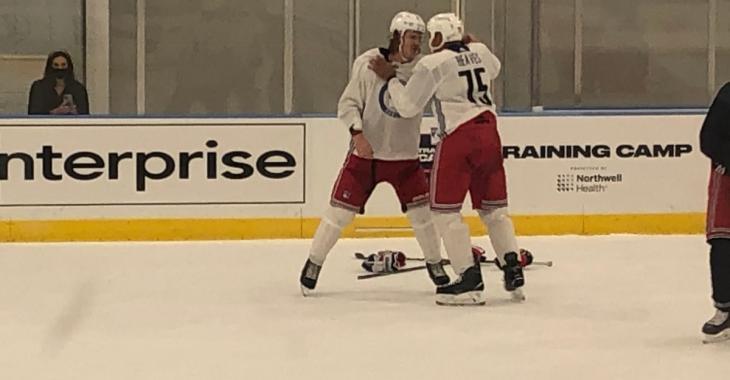 Training camp is officially in full swing for all teams around the National Hockey League with even the veteran players now reporting in for camp as teams prepare for the upcoming 2021 - 2022 NHL regular season, and the New York Rangers are no exception. The best part of training camp is always the surprises that it brings and on Saturday morning we were treated to one of those surprises during the Rangers' Saturday morning practice sessions.

It was during that practice that the NHL's own Dan Rosen spotted New York Rangers first round draft choice Vitali Kravtsov squaring up with infamous NHL enforcer Ryan Reaves, who was an offseason acquisition by the Rangers. It is not unusual for teammates to get physical during training camp, but Rangers fans need not worry about the safety of Kravtsov as this was not a case of two egos coming into conflict.

Instead, again according to Rosen, the two teammates were actually engaged in something of a training session with Reaves acting as a mentor for the 21 year old Rangers forward. Reaves was reportedly instructing his less experienced teammate on the finer points of fighting in the NHL, something that I suspect the Rangers would prefer to see Kravtsov avoid if at all possible. After all I highly doubt that they drafted him 9th overall in 2018 with the intent of having him risk injury by dropping the gloves.

As for those who might be thinking that this was merely some kind of prank or joke, nothing could be further from the truth. According to Rosen no aspect of this exchange was staged, with Reaves providing his younger counterpart with genuine instruction on how to handle himself should things get ugly on the ice.

Many suspect that the decision to acquire Reaves in the offseason, a move that cost the Rangers a third round draft selection, came as a direct result of the now infamous incident involving Washington Capitals forward Tom Wilson and Rangers forward Artemi Panarin in the latter stages of the 2020 - 2021 regular season. This is not proof that this was indeed the case, but it certainly lends more credibility to a theory that many have posited.

Alex Edler leaves Canucks for a lot of money in L.A.
Subscibe to
Our NEWSLETTER
Receive the best articles of the web directly in your email