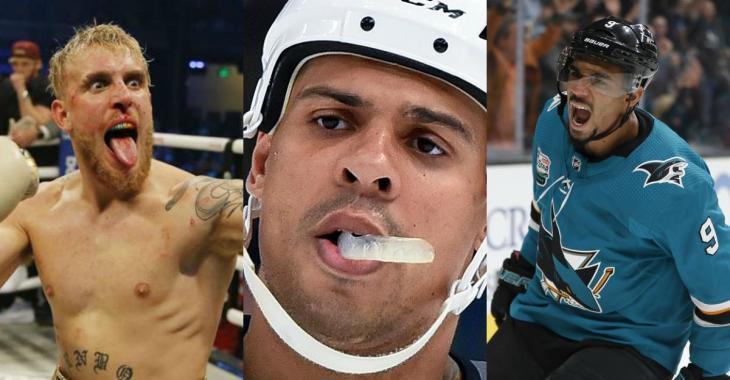 This saga is getting pretty wild and I'm gonna be honest I would love it if something were to actually come of all this.

All of this started on Saturday night when Youtube star Jake Paul stunned the world by putting former National Basketball Association star Nate Robinson to sleep during a boxing match. Although Paul was coming into the fight as a considerable favorite, I don't think anyone expected to see him knockout Robinson in the fashion that he did given Robinson's pedigree as a high level professional athlete.

Following the conclusion of that contest a number of people on social media were calling to be the next to step inside the ring with Paul, including surprisingly a number of athletes from the National Hockey League. San Jose Sharks star forward Evander Kane was the first to issue the challenge, however Las Vegas Golden Knights goaltender Robin Lehner was not far behind.

I will say though Kane seemed by far like the more serious of the two when it came to issuing the challenge, and comments he made on Sunday only reinforced that belief. Kane again directed a tweet at Paul, only this time he had added a date at which he claims he would be prepared to face Paul in the ring.

Now as many of you know Evander Kane has had a long standing rivalry with Las Vegas Golden Knights forward Ryan Reaves, and after seeing Kane challenging someone to a fight Reaves could simply not help but get involved. Reaves laughed at Kane and accused him of effectively ducking him for the past 9 years in the NHL. To add insult to insult, Reaves suggested that diminutive comedian Kevin Hart would make for a more appropriate opponent when Kane steps into the ring.

Kane did his best to respond but went to some strange comment about Ryan Reaves' sisters that didn't really seem to land.

Reaves immediately hit back at Kane and once again pointed out that, in spite of all his tough talk on social media, Kane continues to refuse to fight him in the NHL. Reaves also suggested that Kane should issue a public apology for trying to be a pretend tough guy online.

As if that wasn't enough, arguably the NHL's toughest enforcer also let Jake Paul know that he could get a piece as well.

I can't lie, I would tune in to any and all of these.

Report: Kaprizov agrees to terms in KHL while continuing negotiations with Wild
Subscibe to
Our NEWSLETTER
Receive the best articles of the web directly in your email