NHL News : Rumor: Rumblings that Tkachuk wants out of Calgary

Get those offers in! 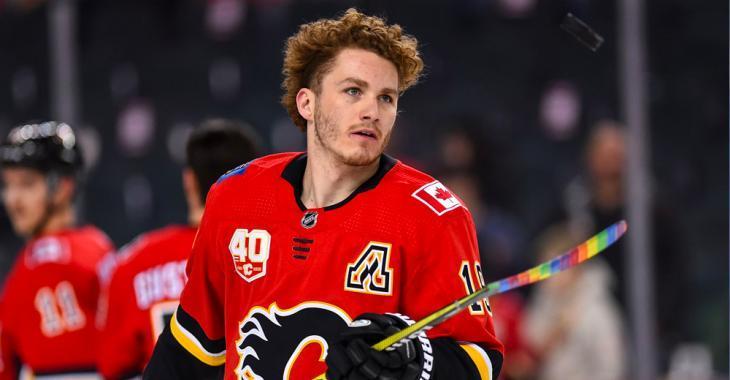 According to a report from Sportsnet analyst and former NHLer Shane O'Brien, Calgary Flames forward Matthew Tkachuk "might want out of Calgary" this offseason.

O'Brien made the remark during the Powerplay Podcast with Steve Kouleas in a larger discussion about the Flames and their future, prompting many to wonder if in fact Tkachuk could be moved this offseason. And now, not 24 hours after being put on the apparent trade block, there are multiple online reports that the St. Louis Blues are very interested in Tkachuk's service. Which, makes sense given his father's history with the team and the fact that both Matthew and brother Brady Tkachuk grew up in the Gateway City.

But, the Flames wouldn't actually trade Tkachuk, would they? He's a 23 year old power forward who already has a 30+ goal and 70+ point season under his belt. He oozes confidence and leadership. In short: he's been everything the Flames could have asked for. There's just one problem... his contract is up. Oh... and there's the fact that the Flames are in absolutely shambles.

Well, shambles may be a bit dramatic, but clearly the Flames are in need of some significant changes. Call it an overhaul, call it a rebuild, call it whatever you want but it's obvious to most that Flames GM Brad Treliving will make some changes to his team's roster this offseason. Tkachuk will be seeking big dollars and big term on his next contract and it'll be interesting to see how Treliving reconciles that with a rebuild or restart. If this team is truly going to go into the tank then maybe it's worth shopping Tkachuk on the trade market to bring back significant assets? Then again, Treliving just committed seven years at $6 million per for goaltender Jacob Markstrom and he didn't do it to have Markstrom guide the team through a rebuild. Frankly, I think reports that the Flames will tear down and rebuild to be a bit premature. Johnny Gaudreau and Sean Monahan have had back to back disappointing seasons, there's no denying that. But with Mark Giordano, Noah Hanifin, Chris Tanev and Rasmus Andersson, the Flames have a solid D corps. Throw in some good utility forwards like Elias Lindholm, Andrew Mangiapane and Dillon Dube up front and you've got the makings of a hardworking squad... especially under Darryl Sutter.

To me, this is a team in need of some tweaking and a bit of a refresh, but I don't think trading away Tkachuk helps them either in the long or the short term. Thoughts?

Fiala and Wild millions apart on a new contract.