A decision has reportedly been made. 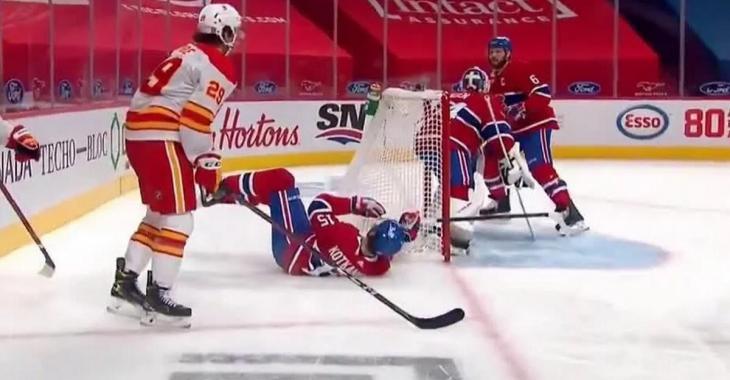 Saturday night was a rough night for the Montreal Canadiens who were handed a 2 - 0 loss at the hands of the Calgary Flames, and unfortunately it would now appear as though the frustration from that game will continue through Sunday due to perhaps a controversial ruling on the part of the National Hockey League's Department of Player Safety.

A report from Ryan Pike of Flames Nation citing league sources claims that there is currently no hearing scheduled for Calgary Flames forward Dillon Dube following a hit on Canadiens forward Jesperi Kotkaniemi. The hit, which was captured by multiple camera angles, does appear to show Dube get his hands up high on Kotkaniemi who was caught unaware by the hit and was placed in the NHL's concussion protocol following the impact.

Here is a replay including several of those angles.

As you would expect fans in Montreal were outraged following the hit, a situation that was no doubt amplified by the fact that the Habs were the only team to walk away from this play with a penalty, and the lack of any supplemental discipline for Dube here will likely not go over well in that city. I can't possibly speak to the motivations of the league given that they haven't issued a public ruling on the hit, and I suspect that we will not be hearing anything from the NHL directly on this matter given that there will be no discipline.

Is this the right call? Should this hit have resulted in a suspension? Let us know your thoughts in the comments.

Update: It is now official.

Phil Kessel lands back on trade block before 2021-22 kicks off!

Rumor: Ducks captain Ryan Getzlaf could be on the move.
Subscibe to
Our NEWSLETTER
Receive the best articles of the web directly in your email