NHL News : Rumor: Marc Bergevin has another trade up his sleeve.

Another move on the horizon for the Habs. 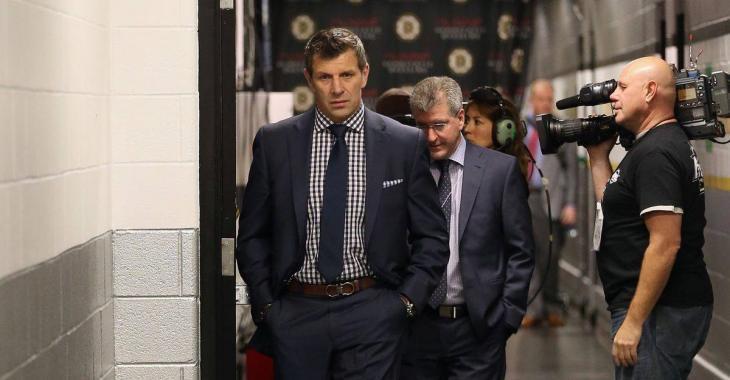 The Montreal Canadiens surprised quite a few fans and pundits on Friday when they pulled off a rather unexpected trade for veteran forward Eric Staal. The trade was surprising because of two reasons, the first was the fact that Canadiens general manager Marc Bergevin had indicated that he would not be making this time of deal ahead of the trade deadline just days earlier and the other was a belief that Staal would remain in the United States if he was indeed traded by the Buffalo Sabres.

Although the move caught many off guard there is now a belief that the Canadiens, and more specifically Marc Bergevin, may have another trick up his sleeve ahead of the trade deadline. Habs insider Eric Engels now points to the fact that the Canadiens have just $486,095 in available cap space as an indication that another move is on the horizon, and there is good reason to believe it may very well be. Habs forward Paul Byron is currently on the team's taxi squad and at a cap hit of $3.4 million they won't be able to flex him back into the lineup if they feel the need to, not unless they can make a cap clearing trade. Add to that the fact that Canadiens top prospect Cole Caufield was eliminated early from the NCAA playoffs, something that could lead to him signing with the Canadiens and joining the team ahead of the playoffs, and you have a sudden desperate need for salary cap space on the part of the Canadiens.

Engels is not alone in his belief either. On Saturday Canadiens insider Arpon Basu also stated that he believes another trade is imminent, with Basu also pointing to the organization's limited cap space following the acquisition of Stael and also mentioning the need to make room for Caufield as a top priority. Basu however believes that the Canadiens will also look to add to their lineup ahead of the deadline, and that is where things get really interesting. The Canadiens insider believes Bergevin will also look to add a defenseman to shore up the team's liabilities at that end of the ice with defenseman Ben Chiarot currently out of the lineup.

Victor Mete and Xavier Ouellet have proved themselves to be inadequate partners for Alexander Romanov on the third pair, at least not regularly, so it will be important to find someone who can play there until Chiarot is ready to return — and who can become a depth piece once Chiarot is back.

All signs currently point to another trade on the horizon from the Habs, and with the deadline closing in we may not have to wait very long.

Rumor: Zach Parise scratched for Game 1 of the Stanley Cup playoffs.
Subscibe to
Our NEWSLETTER
Receive the best articles of the web directly in your email