NHL News : Rumor: Crazy report of a blockbuster deal between Leafs and Sabres

This is WILD stuff! 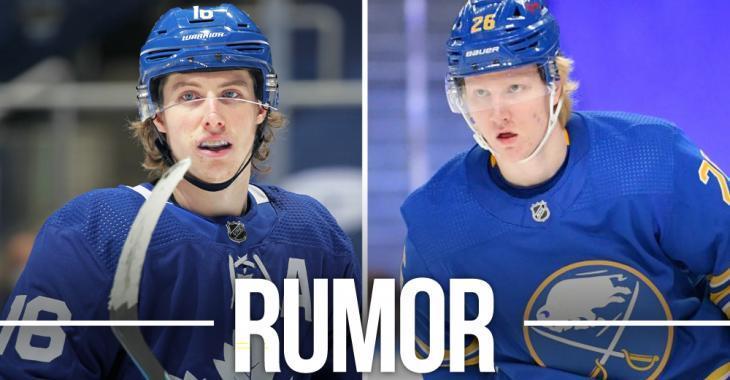 The NHL offseason has provided more than enough fireworks for fans already and the free agent period hasn't even opened up yet. Between blockbuster trades, controversial draft picks and a bit of a botched expansion draft, there's plenty for hockey fans to chew on this offseason. But the potential blockbuster trade between the Buffalo Sabres and Toronto Maple Leafs proposed by NHL reporter Travis Yost would really take things to another level.

In his latest column for TSN, Yost puts forth the idea of a Mitch Marner for Rasmus Dahlin swap in a blockbuster move that would benefit both sides.

So, hear me out for one moment: The Sabres have a pressing need for young talent and hold endless cap space – space that is only going to increase if an Eichel trade ever materializes, or whatever ends up happening with high-priced winger Jeff Skinner and his contract.

Enter Marner – a game-breaking 24-year-old offensive talent coming off a 67-point season (20 goals and 47 assists) in just 55 games played. Marner is signed through 2024-25 and doesn’t have any trade restrictions or movement clauses until 2023, both of which are enticing for a team like Buffalo.

Even on an expensive deal, few teams have the assets to trade for a player like Marner. That’s where Sabres defenceman Rasmus Dahlin comes into play. The former first-overall pick (2018) has shown signs of brilliance in Buffalo, but it’s been rather inconsistent, and the 2020-21 season was particularly ugly. The offensive playmaking and distributing ability is there in spades; so too, unfortunately, was shoddy off-the-puck play.

There would be a lot more going into the framework of a trade involving two names as big as this. The Maple Leafs would get to work on Dahlin’s extension first, then might consider deploying the extra cap space on a top-nine winger – be it through the trade market or free agency.

For the Sabres – well, a lot of work would have to go into building up the blueline. Having recently traded Rasmus Ristolainen and his expiring deal to Philadelphia, the current defensive corps is thin – only Colin Miller, Robert Hagg, and Jacob Bryson are rostered next season, with Henri Jokiharju still an unsigned restricted free agent.

This is where the framework of a trade can expand. Perhaps the Sabres take a look at another younger player like Leafs defenceman Travis Dermott, who suddenly becomes a bit more expendable with Dahlin in a trade.

Marner and Dermott for Dahlin? Who says no?