One of the many moves the Lightning will make to clear cap space? 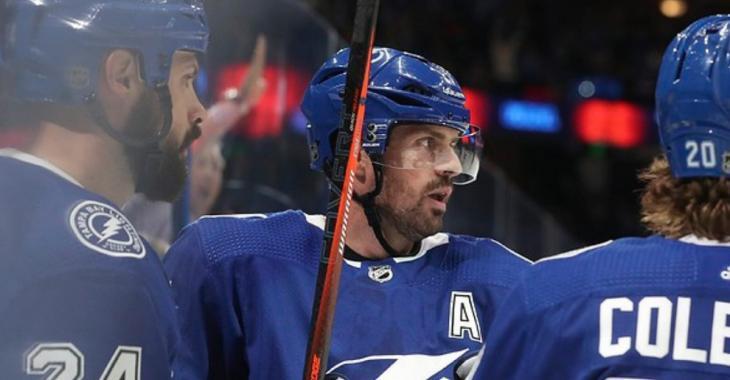 The National Hockey League's offseason has come to a screeching halt in one of the more bizarre free agency periods we've had in years. In spite of the fact that quality free agents remain on the open  market the league's general managers appear to be gun shy, given how much uncertainty surrounds the upcoming NHL season.

Much of that uncertainty surrounds teams like the Las Vegas Golden Knights and Tampa Bay Lightning, teams that are currently over the salary cap limit who will need to get creative in order to be cap compliant. Although neither team currently seems to be in any hurry to make a move that will no doubt change once training camps begin and the regular season draws nears.

In a recent mailbag Devil's reporter Corey Masisak was asked about what kind of move the Devils could have up their sleeves in this quiet offseason, given that with roughly $17 million in available cap space they are in a perfect position to take advantage of the salary cap woes of their adversaries. Although he suggests that the Devil's might be more likely to "wait and see" what players become available during the next offseason, he did suggest that the Lightning's Alex Killorn is an obvious candidate for a trade this offseason.

Alex Killorn is the obvious candidate for a trade, and we’ve talked about him a few times this offseason. After a strong 2019-20 season, he has three years left at $4.4 million. He would add veteran leadership and scoring punch on the wing, but he’s 31 years old and the goal-scoring pace from last year might not be sustainable. Killorn would serve as a replacement for Kyle Palmieri or Nikita Gusev if one (or both) doesn’t return for the 2021-22 season, but the Devils might not be interested in adding him now; they might prefer to wait and see who else could be available next summer/fall.

The Lightning still need to get Erik Cernak and Anthony Cirelli under contract after signing defenseman Mikhail Sergachev earlier this week, so there's no doubt that moves will have to be made in order to clear cap space. Whether or not Killorn is one of those remains to be seen but given that he only has limited trade protection, a 16 team no trade list, while many of his teammates have full no trade clauses does suggests he could be one of the odd men out.

After this upcoming season Killorn will have 2 years remaining on his deal, so this would be a long term investment on the part of the Devils. If they can extract a premium from the Lightning and general manager Julien Brisebois in order to take on that salary however the Devils could very well be the destination for this obvious trade candidate, even if it does come a year earlier than they would prefer.

Rumor: Tom Wilson will not appeal his suspension.
Subscibe to
Our NEWSLETTER
Receive the best articles of the web directly in your email