A surprising move from Vigneault. 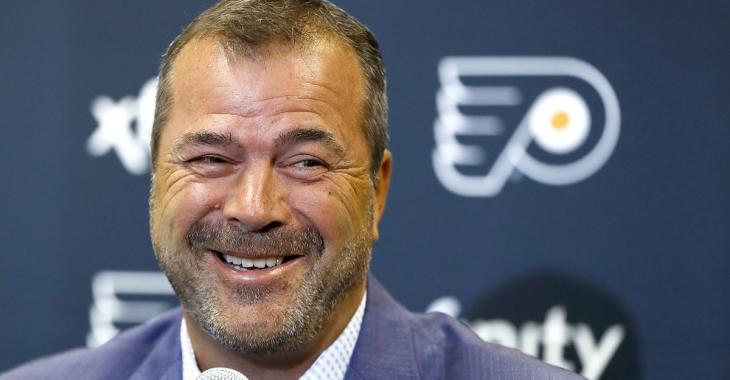 The Philadelphia Flyers head coach appears to be sending a message.

Although we will likely have to wait until Alain Vigneault's media availability prior to tonight's game between the Flyers and New York Islanders, it appears as though the Flyers bench boss has put forward Travis Konecny on the sidelines. NBCS Philly's Jordan Hall was the first to notice that there was something unusual about the Flyers morning skate on Saturday, specifically that Konecny appeared to be skating with the the Flyer's extras at practice. That group includes Robert Hagg, Nate Prosser and goaltender Brian Elliott.

I know it seems like a strange move to say the least, especially given that with 5 goals and 3 assists Konecny currently shares the lead for most goals on the roster with Flyers forward James van Riemsdyk and is just 1 point off the points lead with Jakub Voracek currently having 9 points with 1 goal and 8 assists, but there was little doubt about Vigneault's intentions here. Konecny was on neither power play unit during the morning skate, instead being relegated to watching from the sidelines, skating only with that aforementioned group of extras.

What makes the decision all the more bizarre is that Konecny appears to be healthy. It's not like the Flyers will be bringing in a player of equivalent skill to replace him either, with Samuel Morin looking like the player that will get the call to replace him in the lineup tonight. No disrespect to Morin but the 25 year old has not even appeared in a single NHL game this season and has just 9 total NHL games under his belt since being drafted back in 2013.

In spite of the fact that the Flyers picked up a pair of back to back wins over the New Jersey Devils this week, Alain Vigneault expressed displeasure with the performance of his top 6 group of forwards. Specifically Vigneault referenced the performance of a 'couple of guys' during the game's opening two frames.

This is pure speculation on my part, but when adding the context of Vigneault's comments following the win over the Devil's with today's apparent healthy scratch of Konency leads me to believe that the Flyers forward was one of the guys being mentioned by the head coach.

Bruins get a close call with Brad Marchand!