NHL News : Rookie Kravtsov demands a trade from the Rangers

The 9th overall pick wants out of town. 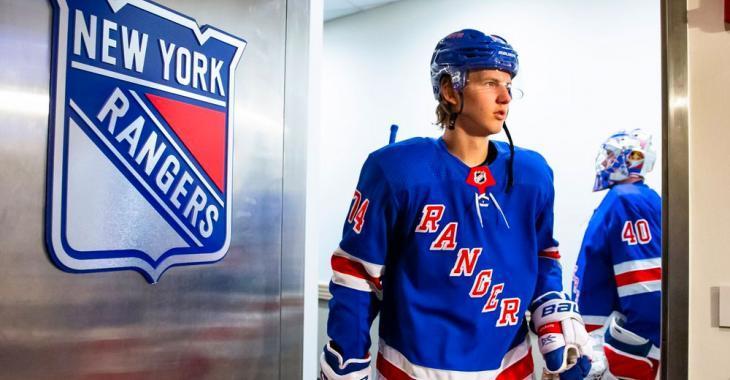 According to multiple online reports, New York Rangers forward Vitali Kravtsov has demanded a trade after failing to make the team's opening night roster. Kravtsov's new agent Dan Milstein has received permission from the team to seek a trade to another team in the NHL.

And according to Rangers insider Larry Brooks, Kravtsov refused assignment to the Rangers' AHL affiliate Hartford Wolfpack and has been suspended by the club for non-compliance.

Kravtsov is a former 9th overall pick from the 2018 NHL Entry Draft and has just 20 NHL games on his resume. He was selected ahead of other top prospects like Evan Bouchard, Oliver Wahlstrom, Grigori Denisenko and the Rangers' own K'Andre Miller. Ouch. He was taken just a few picks after NHL stars like Brady Tkachuk, Quinn Hughes and Adam Boqvist. Double ouch.

In 20 games with the Rangers last season the 21 year old Kravtsov put up two goals and four points. He also managed 16 goals and 24 points in 49 games with the KHL's Chelyabinsk Traktor, as well. By my count this is Kravtsov's third attempt to make the team out of Rangers training camp and, despite having a new coach to impress in Gerard Gallant, Kravtsov was still unable to crack the main squad. Uninterested in reporting to Hartford for a second time, Kravtsov has essentially decided to take his ball and go home.

But here's the thing... I wouldn't be surprised if there's real interest in Kravtsov on the trade market. He has undeniable skill and, while his game needs some refining, he does have two way ability and can be molded into a valuable two-way winger. In particular, I could see Kravtsov fitting in well with a rebuilding team who can afford to move him up and down the lineup as needed. To me, that sounds like the Rangers but... well here we are.

Or, how about shipping him to a team that has been explicit in its need for more Russian players? Vancouver Canucks GM Jim Benning was open about wanting to acquire another Russian player to help rookie Vasili Podkolzin adjust to life in North America, but hasn't pulled the trigger on a deal yet. Might Kravtsov be a good fit in Vancouver? Perhaps Benning and the Canucks cut bait on former 5th overall pick Olli Juolevi a day or two early? He certainly could have been shipped to New York in a potential deal.

Artemi Panarin returns to the Rangers!
Subscibe to
Our NEWSLETTER
Receive the best articles of the web directly in your email