​He had a responsibility and failed miserably… 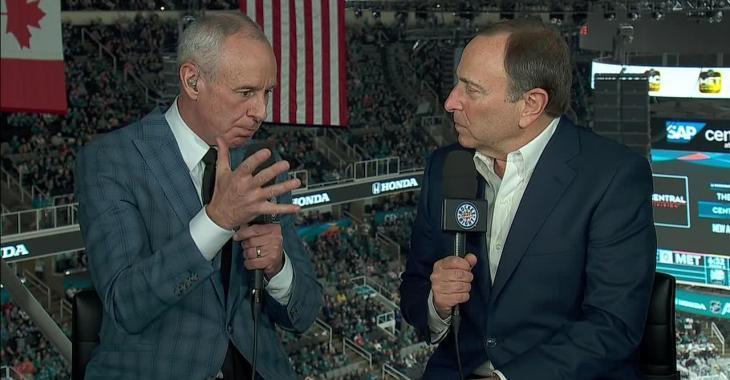 On Monday night, longtime Hockey Night in Canada host Ron MacLean interviewed NHL commissioner Gary Bettman on CBC as is tradition in the Stanley Cup Final. Ever since, MacLean has been taking heat for not questioning Bettman on the ongoing investigation of the Chicago Blackhawks.

The Blackhawks, of course, are under a third party investigation for their alleged involvement in aiding and abetting convicted sexual predator Brad Aldrich. The NHL thus far has declined to comment on the matter other than to say that the league would wait for the results of the investigation before commenting.

“The reaction whenever you hear allegations like that are concerning, but my first reaction is: ‘Tell me the facts,’ ” Bettman said during his annual pre-Stanley Cup final address to the media. “Once we know what the facts are, we’re in a better position to evaluate what may or may not need to be done.”

Bettman didn’t show any concern and compassion, but what do you expected from the commissioner?! However, MacLean should have asked the tough questions. But, this is what he had to say to Ken Campbell as he attempted to explain why he didn’t ask about Chicago.

“This wasn’t one of those, ‘Ron’s been told certain topics are off limits,’ ” MacLean told Hockey Unfiltered in an emailed response Tuesday. “There were no restrictions. The Chicago story is a vitally important story, but Gary Bettman had answered the key questions to which he can, at this point, speak. There’s an investigation which works as a barrier. In a noisy rink with only five minutes, it just seemed to me the wrong place to attempt an overarching conversation, knowing the investigation would prevent speculation or oversight considerations, or anything really. The for-the-record response was going to remain, ‘Can’t address those questions while there is an investigation.’ So I chose different line for the time being.”

The guy is paid enough money to get MacLean to keep the heat on an issue that absolutely needs to be addressed!

According to Campbell, MacLean has a debt to Bettman, and probably didn’t want to mess things up, especially with recent chatter that he could get fired by Rogers. This is how Campbell explains it:

“ You’ll also remember that when Rogers landed the NHL deal, MacLean was replaced as the host and it was speculated it was on the insistence of Bettman. When the George Stroumboulopoulos experiment failed and ratings waned, Rogers knew it had to have MacLean back as host. That could only happen with Bettman’s approval. And as my colleague David Shoalts reported in his excellent book, Hockey Fight in Canada: The Big Media Face Off Over the NHL, that approval was granted on the proviso that MacLean toe the line when grilling Bettman.”

And so MacLean angered many NHL fans, as he does best, and is once again trending on social media for all of the wrong reasons…

Trade Alert: Devils trade former top prospect Will Butcher
Subscibe to
Our NEWSLETTER
Receive the best articles of the web directly in your email