NHL News : Robin Lehner sends a strong message to all the Canadiens fans out there.

Lehner has no chill. 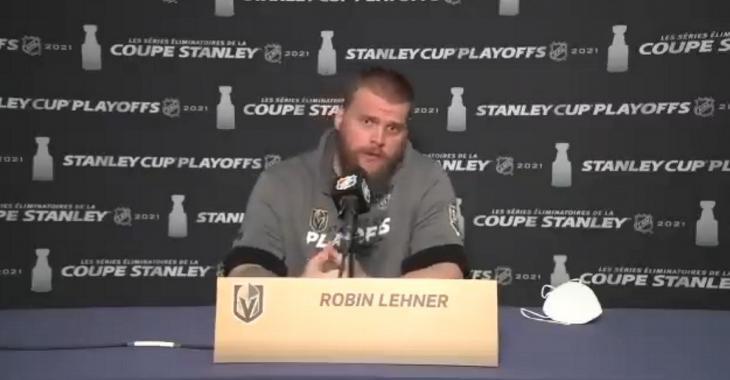 On Sunday night the Las Vegas Golden Knights took a hard fought win over the Montreal Canadiens on their home turf at the Bell Center and they did it with the help of a player who had, up until that point, seen very little action in the Stanley Cup Playoffs.

After a big mistake in Game 3 from goaltender Marc Andre Fleury, Golden Knights head coach Peter DeBoer took a big risk and made the decision to go with goaltender Robin Lehner in Game 4 of the Stanley Cup Semifinals. It was bold because Lehner had made just a single appearance over the last 40+ days and that one appearance had been a massacre at the hands of the Colorado Avalanche, one in which Lehner did not look particularly good. That was not the case in Game 4 however with Lehner having an outstanding performance in which he made 27 of a possible 28 saves on his way to recording a .964 save percentage on the night.

After the game Lehner had a lot to say and perhaps most notable from his post game comments was the message he hand for fans of the Montreal Canadiens, and for his haters and doubters in general. Lehner revealed that he had showed up to the game several hours early in order to sit alone with his phone and read the things that those fans were saying about him on social media. He added that this had fueled his desire to come out and give a good performance, and it's hard to argue with the result.

"It was great," said Lehner during his post game press conference. "Not many people know I come to the game 4 hours early... I get my own bus and come four hours early. I sat for two hours and watched you guys talk shit on Twitter on me and get me motivated. It was great to see what you guys had to say and I don't care what people think... I've been battling hard lately to be a good teammate and to be as good as possible. It's good motivation for me."

Even after he was done speaking to reporters, Lehner continued to banter with his haters on social media. It's only fitting given that the hate he was receiving came from social media that he would respond there, and here's what he had to say.

The Oilers have acquired Dmitry Kulikov.
Subscibe to
Our NEWSLETTER
Receive the best articles of the web directly in your email