Lehner speaks out on the Kane situation. 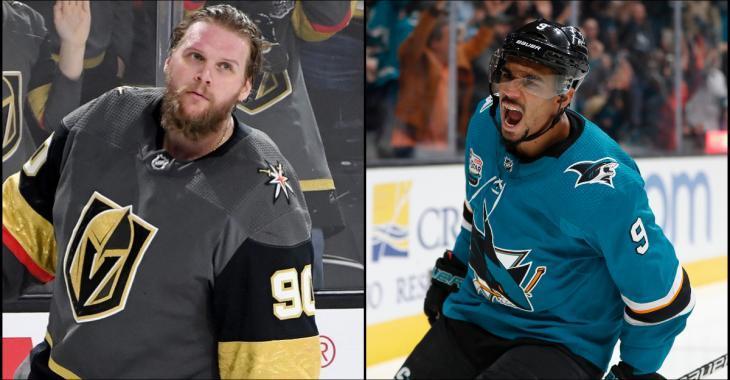 San Jose Sharks forward Evander Kane has been at the center of the hockey world for all the wrong reasons this weekend after his wife, Anna Kane, made some incredibly serious allegations against him on Saturday via her social media. This has resulted in an incredible amount of backlash against Kane from the public, something that not everyone is comfortable with.

Following wave after wave of criticism that was sent Kane's way, Las Vegas Golden Knights veteran goaltender Robin Lehner took to social media himself in an attempt to add some perspective to the situation. Lehner was quick to defend Kane, claiming that his former teammate deserved to be presumed innocent until proven otherwise, while also adding that he had personally never witnessed Kane gamble on hockey during their time spent together.

Here is Lehner, unedited and in his own words:

It’s funny how everything has become guilty until proven innocent and only listen to one side. We gone really fast trough something really hard for a human being to judge once again. I don’t know the facts and we will find out in due time.

When coming to marriage and divorces etc.. non of us knows what is going on yet we jump to conclusions while hearing from one side. I’ve been around evander while gambling many times and never once has there been any hockey involved.

I can’t say for a fact as I don’t have them as well. But for everyone to attack him without knowing the truth is not fair and not the American way. Last thing for me is I wrote in my article how my mental illness put more suffering on my wife and kids then some domestic violence

Put my family trough a very hard time while not knowing being bipolar and treated it my way. Yet everyone was supportive. Gambling is a huge addiction and mental health problem as well and yet no support. It’s more proof that we all get treated different.

Hope with love and support evander will keep working on the problems regarding addiction to gambling witch he has said he is. I hope the best for the whole family. But him being attacked as a father and person is not fair and frankly non of anyone’s business.

Why did people understand how I was a terrible dad and husband while dealing with my health and people attack him for dealing with issues… That’s the question and I wonder why… I hope this gets cleared up as soon as possible for all involved.

Lehner is of course perfectly entitled to his opinion and I do think he makes a good point when he argues that no one really knows who is telling the truth in this scenario.  I suspect however that when it comes to Lehner's comments in regards to the criticism Kane has faced, they likely come as a direct response to the backlash that Kane faced when he published a pair of public statements on Sunday morning.

The reality is that many hockey fans were not willing to give Kane the benefit of the doubt following those statements and although he is innocent until proven guilty in the eyes of the law that isn't true when it comes to the court of public opinion. The fact is Kane has often found himself in trouble during his career in the National Hockey League including a 2016 arrest in Buffalo where Kane was alleged to have assaulted women in a bar as well as his recent legal troubles surrounding gambling and millions of dollars of debt. This in turn has played a big role in how hockey fans perceive his character, which has in turn colored the lens through which those fans are viewing this latest incident.

Ryan Hartman adds fuels to fire with Gabriel Landeskog!
Subscibe to
Our NEWSLETTER
Receive the best articles of the web directly in your email