NHL News : Report: The latest on Kane's gambling investigation, including quotes from NHLers

This is getting UGLY. 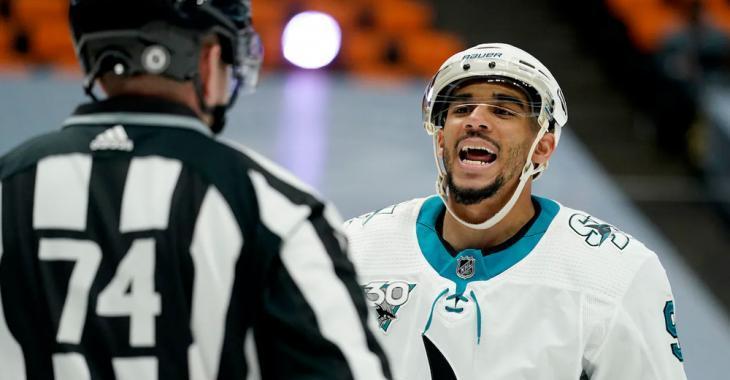 In any case, given the storm of controversy that Kane has kicked up this offseason, you can't blame Sharks teammates for trying to distance themselves from him. If this guy was on my team, I'm not sure we'd be sharing an Uber to lunch very often...

And sure enough Sharks insider Kevin Kurz reports that some of Kane's teammates want Kane gone, regardless of what the NHL's investigation into his gambling allegations uncovers.

"As Daily Faceoff's Frank Seravalli has reported, the Sharks were trying to move Evander Kane earlier this summer, I've confirmed with a source. A big part of the reason is Kane's strained relationship with many of his Sharks teammates, according to several sources. At least a handful of Sharks would prefer Kane not return at all, regardless of the investigation results. We'll see how it plays out."

Honestly, is anyone surprised by this? I can't see the Sharks pulling off a fair trade for Kane at this point. GM Doug Wilson would be wise to wait and see how things play out and then terminate Kane's deal for breach of contract.

Meanwhile, ESPN's Greg Wyshynski did a deep dive on the allegations against Kane and what it could mean for him, the league and the sport moving forward. Wyshynski even managed to get some anonymous quotes from around the league.

ESPN reached out to a few players who knew Kane or have played with him. None said they ever heard him mention betting on hockey.

"Did he like to gamble? Sure. I just don't believe he was actually betting on hockey games," one active player said.

A one-time teammate of Kane was surprised to read the accusations, telling ESPN that while Kane's wagering on football and basketball were well known, "I never once heard him say he bet on hockey."

Part of that skepticism is that betting on hockey games -- through casinos or bookies -- isn't something that's prevalent in NHL dressing rooms, according to those with whom we spoke.

"I've known guys that are big bettors, but I don't think I ever heard of them wagering on hockey," one NHL player said.

As for whether or not Kane betted against his own team and then "threw the game" ala Pete Rose... well, that seems unlikely.

ESPN asked one active NHL player if a forward could exude that much influence. His response? "Time on ice and line changes." In other words, a player like Kane doesn't have nearly as much influence. The average starting pitcher in baseball plays around five innings, over half the game; in 2020-21, Kane averaged 20 minutes and 12 seconds, or just over a third of regulation.

Another player said of the notion of match fixing in the NHL: "I don't think that's ever happened and I don't think anyone would ever do that."

Suffice it to say that there's still a LOT of information that needs to come to light in this story and when it does it has the potential to be the biggest scandal in NHL history. If in fact Kane was betting against his own team and willfully throwing games, the integrity of the sport will be compromised forever.