NHL insider Elliotte Friedman reports that the speedy winger is headed out of Nashville. 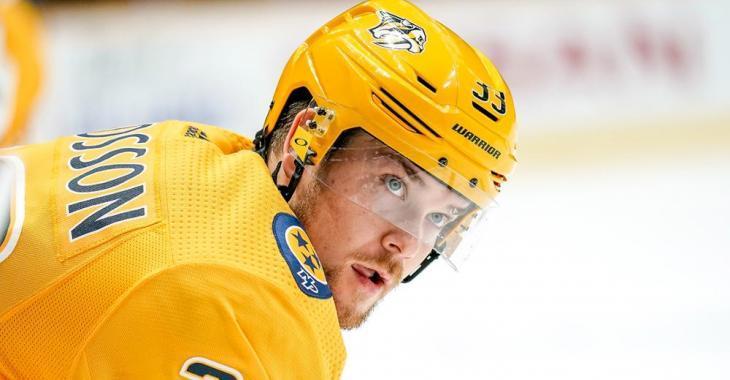 UPDATE: The Kings have indeed acquired Arvidsson from the Predators according to NHL insider Elliotte Friedman.

And now it's official:

Editor's note: This is an updated version of an earlier reported story. Read below for the previous version.

This just in from Sportsnet NHL insider Elliotte Friedman, the Nashville Predators and Los Angeles Kings are working on a trade featuring speedy winger Viktor Arvidsson. It's not yet known what the return for Arvidsson would be from the Kings.

The 28 year old Arvidsson has three seasons left at $4.25 million per season and the Preds have plenty of cap space but after a few disappointing seasons it looks like GM David Poile is ready to re-tool his roster a bit. And just as the Preds have gone, so to has Arvidsson. From 2016 - 2019 Arvidsson averaged 30+ goals a season, but in the past two seasons he has scored just 15 and 10 goals. Ouch. He went from a 60+ point player to a 20+ point player. Double ouch.

It could be that Arvidsson is in need of a change of scenery and there's no doubt that the Kings would provide it. He'd be one of their top players and would likely receive an increase in ice-time by moving west to LA. But, I can't help but feel like Arvidsson would be going from one rebuilding team to another, it's just that the Kings appear to be on the upswing while the Preds likely have some difficult seasons ahead if they decide to completely tear things down. It's also worth noting however that Arvidsson does not have a no-trade clause or any other type of trade protection. If the Preds and the Kings want to do an old fashioned hockey deal, they can get it done without too much trouble.

If this is indeed the end of the road for Arvidsson in Nashville, he'll go down in franchise history as one of the team's most underrated and versatile players. He's quick, tenacious and he has underrated playmaking ability. He's great at retrieving loose pucks for his linemates and you know that each and every game you're going to get 100% effort from him. He's a player you love to root for and personally I'm hoping that he can get his career back on track with a new team and a fresh start.