NHL News : Report: NHL has made a decision on Evander Kane’s contract 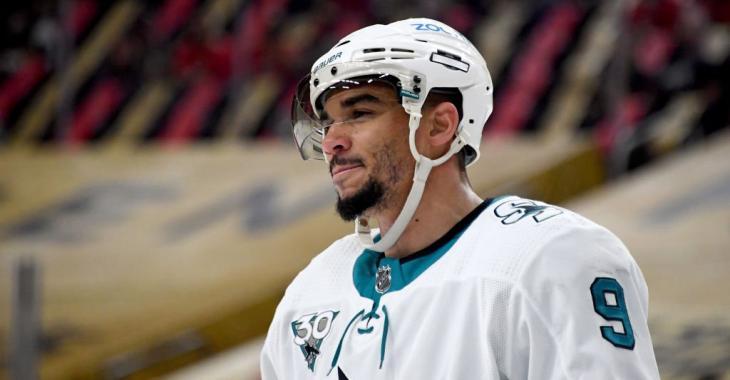 So much has been said about Evander Kane, and yet, it is not enough. We reported on Monday that Kane was not included in the San Jose Sharks’ official roster, seeing that he is still under investigation after allegedly breaking protocols rules.

Earlier this offseason Anna Kane, Evander’s estranged wife, made a series of social media posts alleging that Evander is essentially an unfit parent, a deadbeat husband and an addicted gambler. Anna alleges that Evander made illegal bets on NHL games, including betting on his own team’s game.
Earlier this month, the NHL released an initial report after concluding their investigation into gambling allegations essentially turned up nothing. In a press release announcement the NHL said it “found no evidence to support allegations of illegal gambling.”
At the same time, the NHL announced that it was launching a new investigation into some disturbing sexual assault allegations levied against Kane, as well. And if that wasn’t enough the NHL announced a week later that yet /another/ investigation into Kane was underway concerning COVID-19 protocols. The rumor around San Jose is that Kane had submitted a fake COVID-19 vaccination card and in fact had not been vaccinated.
Needless to say, that Kane has found himself at the center of a lot of controversy this offseason and to date the Sharks as an organization have not yet distanced themselves from him.

On Tuesday in his latest 32 Thoughts column on Sportsnet, insider Elliotte Friedman pointed out that the NHL is leaning towards suspending him and not terminating his contract with the Sharks, hinting at the fact that Kane could resume his career once he serves his suspension.

“Nick Kypreos reported Tuesday morning that the NHL “is leaning” towards suspending Evander Kane under Section 18A of the Standard Player’s Contract. That’s “Commissioner Discipline for Off-Ice Conduct.” It empowers Gary Bettman to fine, suspend, or cancel the contract of any player found in violation. (There is an appeal process.) As previously reported, I don’t think Kane’s contract was in danger of being terminated.”

While we get how Kane needs to pay for his actions, the Sharks have to be wondering what they would do without him in their lineup. We get that his teammates aren’t thrilled about getting him back in the dressing room, though they might think differently if the club struggles again this season.

We’ll have to see if the suspension is confirmed soon and how long it will be and what the Sharks decide to do moving on, which means will they keep Kane in the fold or will they look to move him and move on?