NHL News : Report: Maple Leafs about to make huge mistake in between the pipes

The latest report from insiders won’t ease fans this offseason… 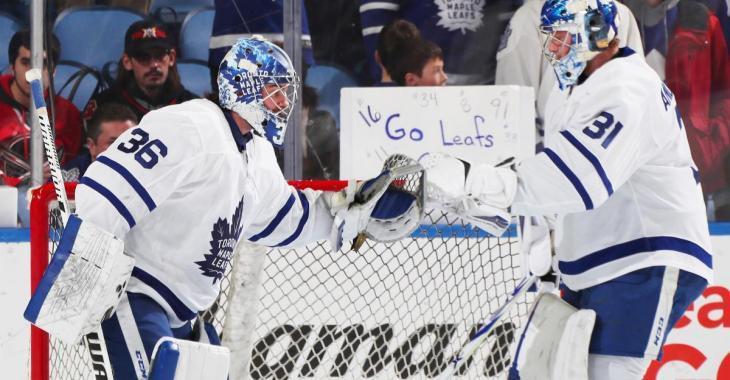 It seems like one of the issues in Toronto has always been goaltending. We saw another chapter of this ongoing story this season when star goalie Frederik Andersen got sidelined with a lower-body in mid-March. But then, Jack Campbell came out, ready to take on the challenge and has done tremendously well in the process. Sure, Campbell did not get the Maple Leafs past the Montreal Canadiens in the first round of the series, but he put doubt in the minds of many that Andersen might not be needed back.

I believe fans in Toronto are fine with the idea that Andersen could sign elsewhere this summer and are hoping that general manager Kyle Dubas will get a contending goalie in net to allow the Maple Leafs to move past the freaking first round.

However on Tuesday night, Pierre LeBrun reported on Insider Trading on TSN that there is a chance that Andersen stays put in Toronto.

“I don’t know about a discount, but yes, there’s a chance that Frederik Andersen stays with the Toronto Maple Leafs. This is a bit surprising given that a lot of people around the situation felt that Andersen was probably for sure headed towards free agency, which could still happen. Claude Lemieux, Andersen’s agent, told me that he spoke with Leafs management on Monday and the question they got from the Leafs is: Is Andersen interested in potentially signing with Toronto and staying put? The answer from Lemieux to the Maple Leafs was ‘yes’. It’s one thing to have a mutual desire to get a deal done and it’s another for it to fit with the Maples Leafs’ cap situation. Sharing the net with Jack Campbell is something that Andersen would be ready to do.”

Fans were hoping to see a change in net for the Maple Leafs since it has been a constant issue going into the postseason, but it’s starting to sound like they are willing to put their trust in Campbell, and have Andersen as a potential backup.

This sounds like a significant mistake... Not sure this is the way to go to convince fans in TO that the Maple Leafs can go for the Stanley Cup, but we have to remember that Dubas does not have a whole lot of cash to spend on free agent goalies to get an upgrade in between the pipes.

What do you make of this rumour?