NHL News : Report: Luongo as the next Canucks GM!? 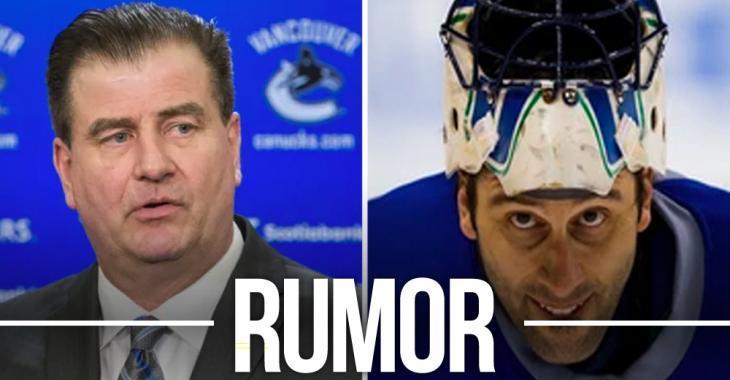 It's not exactly a secret that Jim Benning is on the hot seat.

Benning, the Canucks' general manager since 2014, had an absolutely disastrous offseason and is now deemed to be responsible for the team's poor start to the season. Benning famously wiffed on pending free agents Jacob Markstrom, Tyler Toffoli and Chris Tanev and instead put his focus on acquiring Arizona Coyotes captain Oliver Ekman Larsson. In the end, Benning ended up with none of those players on his roster and was forced to scramble by signing veteran goaltender Braden Holtby and acquiring veteran defenceman Nate Schmidt. Well.. in 15 games so far this season Holtby has been a disaster and Schmidt has been barely noticeable. Meanwhile, Toffoli is one of the most prolific goal scorers in the NHL and Markstrom looks like the best Flames netminder since Miikka Kipprusoff. Suffice it to say that things could not have gone worse for Benning and the Canucks to start this season. As you might imagine a LOT of Canucks fans are calling for Benning's head. And while it may not come as a shock if and when Benning is fired, his potential replacement could absolutely shock the entire hockey world.

Let's say there was a GM change in Vancouver, do you think they make a run at Luongo? Those fans love him. If you're making the change here, why can't he do it? He knows the market. He knows the heat of it. He knows the craziness of it. Biggest question is, 'would he want it'?

I gotta say... while it's interesting and probably gets people talking, I don't see this happening. The Canucks are at too critical of a junction in their team development to bring a rookie GM on board. If Benning is going to be shown the door, he'll likely be replaced by someone with some real experience and a history of turning a team around. It would be a great story for Luongo to return to Vancouver after all these years to fix their problems, but frankly it sounds more like he'd just be set up to fail. In fact, didn't the Canucks try this already when Trevor Linden was brought in as team President? After four middling years as an executive, Linden resigned from his position with the team. I can't imagine Luongo would fare much better, but at this point... what do you have to lose if you're a Canucks fan?