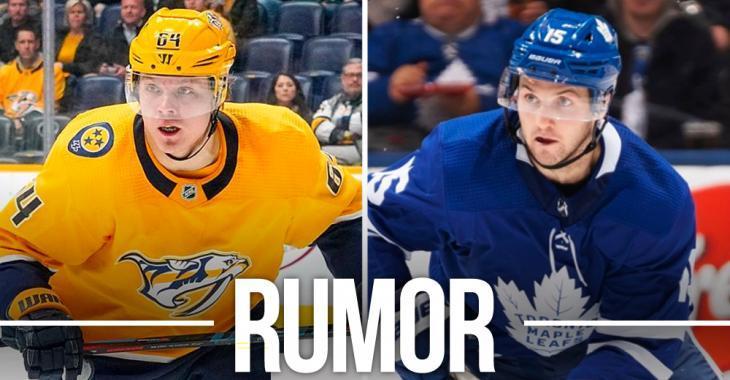 Last week it was reported that the Nashville Predators and Toronto Maple Leafs had had some informal trade discussions specifically about forward Mikael Granlund. Now NHL insider David Pagnotta is reporting that the Leafs also have interest in Preds forward Erik Haula. Interestingly enough, Leafs GM Kyle Dubas approached both Granlund and Haula this past offseason before the pair ultimately signed with the Preds.

This is why Leafs GM Kyle Dubas has been quietly scouring the market for affordable options, which can be tough given how little salary cap flexibility he has. But a team the Leafs are keeping an eye on is the Nashville Predators.

The Leafs had interest in Mikael Granlund and Erik Haula in the off-season – Granlund more than Haula – and both can become UFAs this summer. If/when the Predators officially enter the seller’s market, these two veterans will be on Toronto’s radar.

Nashville has plenty of cap space and can retain salary if needed – Granlund has a $3.75 million cap hit, while Haula has a $1.75 million hit – and I wonder if Leafs centre Alex Kerfoot would be of interest to the Preds. Moving him and his $3.5 million AAV (he has two more years on his deal) as part of a package for two rentals provides Toronto cap flexibility in the off-season and gives Nashville a 26-year-old mid-six forward owed just $2.7 million in total salary in each of the next two seasons. Granlund can slot on the left side of the Leafs’ second line with Tavares and Nylander and Haula can take over the 3C position.

Interest to see Alex Kerfoot included as a potential trading chip for the Leafs, especially given that he was acquired for Nazem Kadri a player that the Leafs surely regret trading. It'll be interesting to see how this plays out between now and the NHL trade deadline in April

Dominique Ducharme confirms terrible news for Sami Niku.
Subscibe to
Our NEWSLETTER
Receive the best articles of the web directly in your email